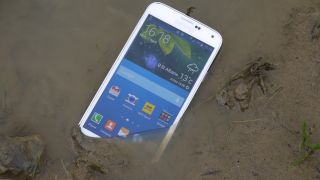 A phone that can handle even MORE mud

Update: A spokesman for Samsung has been in touch with us to clarify that the company's May 28 "Voice of the Body" announcement is being made by SSIC, part of Samsung's Components Group.

The group, the spokesman said via email, is separate from Samsung Mobile, which is in charge of Galaxy devices.

According to Samsung VP Stefan Heuser speaking with Re/code, Samsung won't actually unveil a product May 28.

Unless Samsung is pulling a heavy sheet of wool over our eyes, we're not going to see the Galaxy S5 Active that day. The questions then are; what are we in for come the end of the month and when will the S5 Active show its face?

The Galaxy S5 Active, the rough-and-tumble version of Samsung's flagship phone, must be jazzed to hit the trail as rumors of it refuse to sit quiet.

First pit stop was the FCC, where a phone model number SM-G870A (thought to be the S5 Active) made a pass. It's thickness was absent, but the US regulatory body checked out a device that measured 143mm long by 73.45mm wide. By contrast, the Galaxy S5 measures 142 x 72.5mm.

Then, several European retailers started posting placeholder pages for a device model number SM-G850F, believed to be the international version of the new Active phone.

None of the above serves as infallible proof the phone exists, but given Samsung's track record of releasing several variants of the same device and the growing number of breadcrumbs, it seems fairly certain the Galaxy S5 Active is about to burst on the scene.

That day may come sooner than we think.

Samsung has a "Voice of the Body" event scheduled for May 28 where it's starting "a new conversation around health." Could the Galaxy S5 Active be part of its health-nut plan?

We'll be on the ground in San Francisco for Samsung's reveal later this month, so stay tuned.