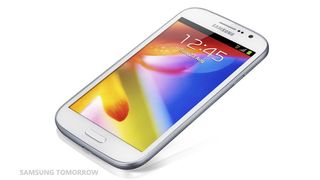 Looks like a S3, as big as a Note, but possible cheap as chips

The Grand name gives you a hint that this isn't a run of the mill mid-range blower; this is a 5-inch handset which brings the real estate of the Galaxy Note to the more budget-centric market.

While the screen may be expansive, its quality is much less impressive boasting a mediocre WVGA 480x800 resolution which will appear lower res simply due to the sheer size of the display.

Under the hood there's a 1.2GHz dual-core processor, 1GB of RAM, 8GB of internal memory, Android Jelly Bean, while round the back everything looks a bit Samsung Galaxy S3 with a centralised 8MP camera flanked by a single LED flash and speaker grill.

There's also a front facing 2MP camera and all the usual connectivity options including Wi-Fi, Bluetooth, A-GPS, USB and DLNA, but there's no sign of NFC.

In short the Galaxy Grand is a slightly less well-equipped Samsung Galaxy Note, but sporting the style of the current crop of Galaxy handsets.

There's currently no word on the Samsung Galaxy Grand release date or price, although we'd expect it to arrive in the major markets, with two models (single and dual-SIM) being made.

Update: TechRadar has spoken to Samsung UK, who said: "UK availability of the Galaxy Grand is yet to be announced, a statement regarding UK launch confirmation will be made in due course. "

Update 2: Samsung has now confirmed that "the Galaxy Grand will not be available in the US or Australia" - so tough luck if you're in either of those two regions.