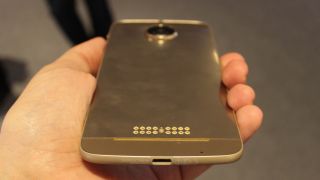 Rumors of the iPhone 7 dropping the traditional 3.5mm headphone jack have been building for quite some time, but Motorola has now beaten Apple to it by ditching the tech on its new flagship phones.

The new Moto Z and Moto Z Force have both dropped the audio input method and now rely on either Bluetooth connectivity or a USB-C adapter to listen to music.

The Moto Z is one of the thinnest smartphones in the world - using add-on features called MotoMods to add functionality - and that may be why Motorola decided to drop the 3.5mm jack.

The Moto Z is only 5.2mm thick after all. The Moto Z Force is thicker though at 7mm, which suggests Motorola had another reason to drop the outdated tech.

The motivation, according to an interview with The Verge, was to promote a higher level of audio, which is made possible through the USB-C port.

That's likely why Motorola has taken the step as well.

Rumors of Apple dropping the headphone jack have caused uproar with over 300,000 people signing a petition to stop the move, but with Android manufacturers already taking the controversial step it doesn't bode well for those who like to use wired headphones on the latest Apple phones.

It looks like Apple will allow you to use headphones through the lightning connector on the bottom of the iPhone 7 though – it's just that expensive pair of headphones you just bought may need to go through an adapter as well.