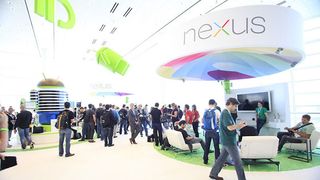 Could there be a Nexus 5 on that stand?

The Google Nexus 4 has been taken off the shelves of two British retailers, prompting speculation that the Google Nexus 5 is just about ready to launch.

Both Carphone Warehouse and Phones4U have stopped selling the aging Google handset, although you can still buy it from Google direct and through networks like O2.

This stock slow-down chucks gasoline onto the fire of speculation that we'll see the Nexus 5 launch at Google I/O in June.

Some rumours point to LG again being behind the Nexus 5, having made the sparkly-backed Nexus 4.

Either way, we're expecting the next Nexus to come rocking a new version of Android, specifically Key Lime Pie (Android 5.0) - although there may be a delay between the big unveil and the OS launch as Google lets manufacturers' hardware catch up with its software.

Thanks to our tipster for sending this in!