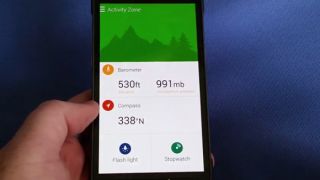 Ride into the ACTIVITY ZONE

The last time we saw the rumored Samsung Galaxy S5 Active it seemed its specs were more or less identical to the standard Galaxy S5's.

Perhaps in response, TK Tech News - the same YouTube channel that leaked the previous benchmark video - has returned with another clip, this time pointing out some of the major differences that will be found in the S5 Active.

Prominent among them is a new app called "Activity Zone" that appears to have a number of features exclusive to the sporty handset.

So much room for activities

As the disembodied hand and voice in the video point out, Activity Zone appears to be an extension of Samsung's S Health app.

The Galaxy S5 Active's Activity Zone is apparently a place from which to access the phone's barometer and compass, as well as stop watch and flashlight features.

The Activity Zone also has a shortcut to the phone's existing S Health exercise app.

The video's narrator also claims the Galaxy S5 Active is "faster" than the Galaxy S5, though that claim seems somewhat dubious, considering his last video said the two phones have the same specs.

But he also says the Active is actually slimmer than the existing Galaxy S5, not thicker as its extra rubber and metal bits might seem to suggest.