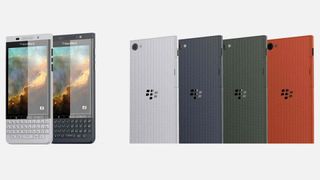 Hot on the heels of the release of the Priv, images of a second Android-powered BlackBerry device have appeared.

Crackberry has the scoop on the device, which is codenamed 'Vienna', and it's quite different to the Priv. For a start, the physical keyboard isn't just still present, it's now omnipresent as it doesn't slide away, as on the Priv.

In another departure from current Android trends, the 'back', 'home' and 'recent' buttons at the bottom of the screen will be actual hardware buttons rather than on-screen. The keyboard is very reminiscent of 'classic' BlackBerry phones.

The switch to Android came off the back of poor sales of phones running the company's own BlackBerry 10 operating system.

So it appears that the Priv wasn't just a one-off – which is good news as we were pretty impressed with it, awarding it four stars.