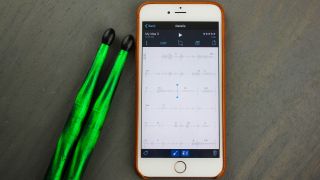 Your iPhone is now the world's smallest soundboard thanks to new studio-simulated iOS apps Apple Music Memos and an updated GarageBand 2.1.

Music Memos is the more musically gifted brother of Voice Memos in that it can analyze rhythm and chords of acoustic guitar and piano recordings, then instantly add drums and a bass line.

This virtual backup band is completely customizable, according to Apple, and the recording uses the iPhone's built-in microphone in a high-quality, uncompressed format.

On-the-go artists using Music Memos can also name, tag and rate their tracks, then use iCloud to further develop them in GarageBand and Logic Pro X, or simply stick them straight on Apple Music Connect.

GarageBand 2.1 on the run

GarageBand 2.1 adds Live Loops to Apple's popular mobile music creation app. It works by tapping a grid of cells that trigger different looped instruments and samples, making it easy enough for anyone to use.

Apple pre-loaded the new GarageBand update with a bunch of loop templates that spans genres like EDM, Hip Hop, Dubstep and Rock, but you can also create your own loops from scratch.

The user interface includes new recording controls, automation features and a simplified EQ. While Apple is touting the expansive 12.9-inch iPad Pro display as the best way to mix up for music, the iPhone 6S and iPhone 6S Plus have 3D Touch capabilities. You can't have both a giant touchscreen and 3D Touch. Not yet, at least.