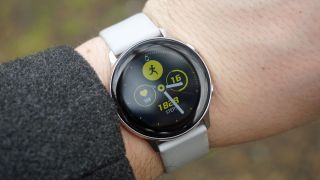 The Samsung Galaxy Watch Active 2 is expected to be launched within the next couple of weeks – perhaps just ahead of the Galaxy Note 10 – and thanks to documents filed with the Federal Communications Commission (FCC), we've got an early look at it.

As spotted by Droid Life, the FCC filing is unusual in actually including pictures of the device being registered, something that doesn't usually happen.

The pictures don't actually reveal too many surprises about the wearable, with a design largely unchanged from last time. The rumor is that Samsung has added a rotating touch bezel to the watch, but it's hard to tell from these snaps.

Based on earlier tips, the Samsung Galaxy Watch Active 2 could make its appearance on Monday August 5, so all will be revealed soon. That would be two days before Samsung's scheduled August 7 event for the Note 10.

If the leaks so far are to be believed, the watch is going to turn up in a choice of 44mm and 40mm sizes, carrying a 1.4-inch and a 1.2-inch display respectively. Both sizes will offer a 360 x 360 pixel resolution and a Super AMOLED screen.

As well as that touch bezel, the Galaxy Active Watch 2 is expected to come with an Exynos 9110 chip inside (the same as in the original Active Watch) plus 4GB of storage.

The Bluetooth model of the Galaxy Active Watch 2 is going to come carrying 768MB of RAM, according to reports, while the brand new LTE version introduced this time – for standalone calls and data access without Wi-Fi – will turn up with 1.5GB of RAM on board.

Black and silver are said to be the colors you've got to choose between, while stainless steel and aluminum finishes are apparently on the cards as well. In a little over a week we should get all the details confirmed.