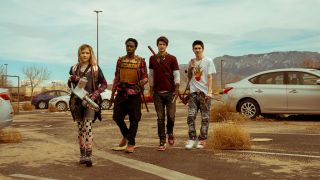 It seems like everyone and their roommate is getting into podcasts these days, so it should come as no surprise that Netflix is jumping on the bandwagon, and its first scripted narrative podcast is set within the lore of its new post-apocalyptic teen drama, Daybreak.

The new Netflix TV series dropped on October 24, with 10 episodes fleshing out the season, in which adults have become mindless zombies and high-school cliques rule the resulting wasteland.

The spin-off podcast – The Only Podcast Left – is set to expand the world of the show, with its characters hosting their own six-episode, in-world podcast. It will be a timed exclusive for Spotify, too – coming to the music streaming service on October 30 and releasing on other podcast platforms later in the year.

The podcast description is as follows: "After you tear through Daybreak Season 1, you'll want to meet the AV Club. They’re a group of kids who survived the apocalypse by using their skills to rig cameras and spy on warring tribes all over the valley. And now they’re making a show about it, while juggling their own personal drama and trying to stay alive as mutant pugs, ghoulies, and a mysterious new tribe all try to kill their vibe. It's The Only Podcast Left."

Speaking to Variety, Daybreak showrunner Aron Coleite said that “Netflix is an amazing creative partner. When they asked us to do a narrative podcast in the Daybreak world, we came back with the most insane idea we could think of and they didn’t even blink. In fact they got even more excited about what we were trying to create."

You can listen to the podcast 'trailer' below.

Podcasts are increasingly being seen as a smart and cost-efficient way to get beloved content to audiences, given the average podcast episode will only need a few people sitting around a table, compared to the comparatively massive production budgets of most Netflix shows.

Apple is looking to produce exclusive podcasts too, though Spotify has been ahead in this regard, with a Daily Drive playlist feature that throws podcasts and news items into the mix alongside your music.

Netflix has proved itself pretty adept at shifting to different production and distribution methods, first by pivoting to online streaming and then by producing its own video content for the platform – so evidence suggests that podcasts could be similarly fertile ground for the media giant.