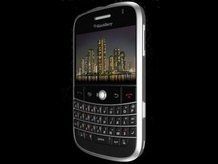 Vodafone has announced the arrival of the RIM BlackBerry Bold in the UK from today, and hopes it will be one of the major sellers of the year.

The slimmed-down and powered-up handset will be the first BlackBerry to run on Vodafone's hi-speed HSPDA 7.2mbps network, as RIM finally gets on board with 3G technology.

The Bold is RIM's new flagship device, with WiFi, GPS, large storage capabilities and a large half-VGA colour display (480x320 resolution at 217ppi), putting it clearly up against more media-centric devices without losing any of the email fun RIM has built its business on.

It is available for free from Vodafone, but only on the Anytime 600 data plan for £35 a month with a 24-month contract, which may give you 600 minutes talk-time, unlimited texts and 500 MB data per month, but is a long time to be locked to a handset.

T-Mobile has also got its hands on the Bold for the UK market, so at least there's plenty of choice... none of this O2/iPhone nonsense, eh?

You could just write your own letters and talk to people face to face - you know, get a bit old school. And that's practically FREE!