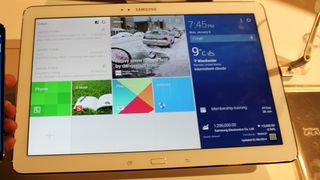 Apparently content to throw devices against the wall and seeing what sticks, Samsung appears to be readying another big-screen slate in an effort to see if professionals are willing to ditch keyboard-based laptops for larger tablets.

Citing an "inside contact" at Samsung, GSM Arena reported the Korean manufacturer is working on a new member of the company's Galaxy Tab Pro line, which topped out earlier this year with an insanely large 12.2-inch model.

That device may actually wind up feeling humbled in the presence of a 13.3-inch tablet bearing the code name "Warhol," expected to debut in a Wi-Fi-only edition with the model number T910, as well as a T911 cellular-equipped version.

Leaked specs indicate a WQHD display with a resolution somewhere in the neighborhood of 2560 x 1600, which equates to 227 pixels per inch.

Too big for AMOLED?

The same report notes Samsung is also prepping a pair of tablets with smaller displays, but those devices bearing the code names "Chagall" and "Klimt" will ship with more vibrant Super AMOLED screens. Their displays measure at 10.5 inches and 8.4 inches, respectively.

The AMOLED tablets will share the same number of display pixels, but the smaller screen sizes will equate to a larger pixel-per-inch count: 288 in the case of the 10.5-inch (likely to be released as the Galaxy Tab S), and 359 on the 8.4-inch model.

Samsung will instead stick to a more traditional LCD display for its mammoth 13.3-inch "Warhol," which is said to run a customized version of Android 4.4 KitKat, just like the smaller AMOLED models.

There's no word on when Samsung might actually announce - let alone begin shipping - this trio of new Tabs. The slates are tipped to include higher quality front and rear cameras and possibly fingerprint readers as well.