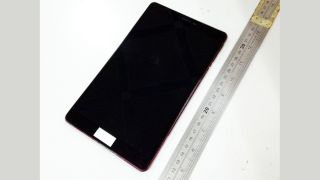 We always had something of a soft spot for the Nexus 7 but Google obviously didn't feel the same way, killing off the iPad mini rival earlier this year. Now it looks like there's an all-new, slightly larger slate on the way.

There were a few whispers about a Nexus 8 earlier in the week and now we have a shot of a dummy device that purports to be very similar to the real thing in terms of dimensions and looks. We don't have any clue yet who the manufacturer is going to be.

Is Google ready for another go at the tablet market? This isn't conclusive proof but 8 is one of the few numbers still left that has never had a Nexus label attached to it. This year's smartphones are expected to keep the Nexus 5 and Nexus 6 monikers.

Slate to the party

Even Apple struggles to shift tablets in numbers that are high enough to keep shareholders happy, but we're hoping that Google keeps the Android tablet dream alive, even if the Nexus 9 hasn't proved particularly successful.

Based on the benchmarking leaks we've already seen we're expecting the device to feature an octa-core 1.3GHz CPU made by MediaTek. It's a good bet it's going to come out running Android 6.0 Marshmallow too.

The sources on this one aren't the most well-known in the tech world but last year Google launched a Nexus tablet at the same time as a Nexus smartphone so we're going to keep hoping for a repeat this time around.