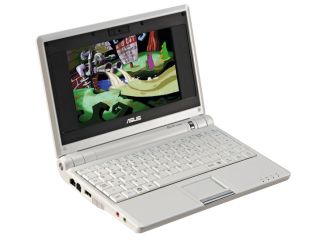 Asus' Eee PC has been an unexpected success. Could we see the next one in a few days?

Is Asus Eee PC about to get overhauled with more power? Taiwanese sources seem to think so, with a new model set to be unveiled at next week's CES in Las Vegas.

The new machine would almost certainly include the option of Windows from the off. The current Eee PC ships with a Linux-based system but will run Windows XP if you install it. However, it's well-known that Microsoft has been working on a cut-down version of its OS, possibly even derived from Vista.
However, we're not sure how much credence to give these rumours because they also mention support for Wimax. Although Intel is set to include the standard within a forthcoming Centrino revision, the standard is a long way off gaining traction in Europe and the US.

However, it seems Asus appears to be readying a partnership with US carrier Sprint as well as Intel itself. Intel hopes that its involvement in Wimax will help push the so-called 'last-mile' technology.

The rumours also suggest that the new model will also have a larger screen size of 8.9-inches.

Asus is set to host events on Sunday and Monday at CES in Las Vegas - and we'll be there.