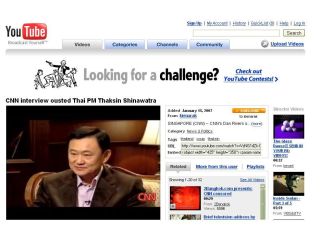 Thailand blocked YouTube for two days last week, according to reports. The Thai government has not given an explanation for the block but a link with ousted Thai leader Thaksin Shinawatra has been suggested.

When net users tried to access the popular video website, they were greeted by a MICT (Ministry of Communication and Technology) holding page. The block had been removed by Saturday evening.

Popular Thai blog 2Bangkok said: "The reasons and criteria for blocking are usually not made public.

"In the past, if the resulting controversy over a certain blocking is too great, the blocked site comes back online and the government denies it was ever blocked at all."

Thailand isn't the first country to place a ban on YouTube. Brazil banned the site last year when a secretly-shot video of a famous model was posted on the site.

Earlier this month, Turkey banned the site when videos were found insulting a revered figure in Turkish history. The country has since removed the ban.