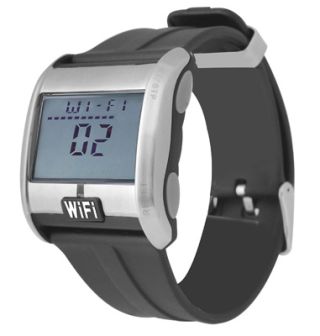 All secrets agents have Wi-Fi scanning watches and you can, too

We all know the pain – you really need to send a quick email but can't find some free Wi-Fi.

You could pay, but then is it really worth paying through the nose for a few minutes access? Don't worry, here's our guide to finding free wireless internet wherever you go in the UK.

If you have an iPhone, you'll know this problem well – but there are perks. You can get free access to any of The Cloud's hotspots as part of your contract. Just connect and enter your iPhone mobile number when prompted.

There are a lot of Cloud hotspots in pubs and bars, for example, housed in those ItBox gaming machines that you usually play Who Wants to be a Millionaire? or Deal or no Deal on after you've had a few.

Many independent pubs, coffee shops and bars have seen the light and now offer free Wi-Fi to customers. This is no secret – often the wireless key is just posted on the wall – so after you've been in once you can get free access even if you're outside.

Bigger chains are also jumping on the free Wi-Fi bandwagon – but not too many. McDonalds offers free access to customers, while Wetherspoons does the same and even produces leaflets telling you how to get online.

Pret A Manger also has free Wi-Fi available in many of its take-away or stay-in eateries, as does Coffee Republic - though the coffee chain only limits the free bit to 10 minutes.

And more will surely follow. Starbucks may not be free in the UK (it uses BT Openzone as its hotspot provider) but it is in other countries including Germany.

There may also be ways to get free Wi-Fi with your broadband deal. All BT broadband customers have BT Openzone minutes bundled in (how much depends on which package you've got), so you can get access via the BT Openzone hotspot network.

Get it with mobile broadband

If you have T-Mobile mobile broadband, customers on some of the web'n'walk Max, Plus, or Plus Daily packages can get free Wi-Fi access in any T-Mobile Hotspot location you find. Like BT, T-Mobile has a vast number of hotspots throughout the country in places like airports, hotels and, as we said before, virtually every branch of Starbucks.

T-Mobile is also available on certain Virgin Train services on the West Coast Main Line. Wi-Fi on trains has been an on/off concept ever since former operator GNER started deploying it on the East Coast Line.

Wi-Fi is now available free of charge on all National Express East Coast trains, in both First and Standard Class. There have been numerous campaigns for full free train Wi-Fi to be implemented.

Wi-Fi is free on Virgin should you be in first class. While this isn't an option for most of us, there are some stonking first class deals on some routes if you book ahead, so this could be a good long journey option.