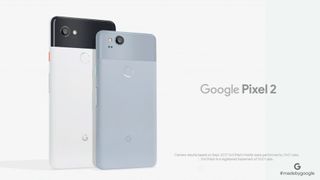 The Google Pixel 2 and the bigger Pixel 2 XL have been rolled out at a special event in San Francisco.

Pixel 2 XL is the larger version of Google’s flagship smartphone, the Google Pixel 2, and the direct sequel to last year’s 5.5-inch Google Pixel XL. On the other hand, the Pixel 2 boasts a slightly slimmer bezel than its predecessor (the Google Pixel) either side of the screen, but there's still a chunk above and below the display as it opts for a more iPhone 8/Sony Xperia XZ1 layout rather than the all-screen Galaxy S8 and LG G6.

This does mean you get front facing speakers, around the back Google persists with its divisive glass/metal split design, with a centralized fingerprint scanner and single rear facing camera in the top left corner like last year.

Pre-orders commence on 26th October 2017, and Pixel 2 will be available for sales in over 1000+ stores across the country  and online starting November 1st and Pixel 2 XL will be available for sales in 1000+ stores and online starting November 15th 2017. You must note that you won’t be able to purchase either of these devices through the Google Store in India, as Flipkart will be an exclusive retailer for India.

Both the Pixel 2 phones have identical internals. They run on the ubiquitous SoC Qualcomm Snapdragon 835 topped with 4GB of RAM and comes in 64GB and 128GB storage options.

Moreover, both the phones use HTC's 'Edge Sense' renamed as 'Active Edge' that triggers Google Assistant when squeezed, and also can click pictures when the camera is turned on.

The Google Pixel 2 sports a 5-inch FHD AMOLED display, whereas the Pixel 2 XL has a 6-inch QHD+ P-OLED panel. Not just the display size but the phones also have a distinct aspect ration at 16:9 for Pixel 2 and 18:9 for Pixel 2 XL. Both have Corning Gorilla Glass 5 protection.

The Google Pixel 2 and Pixel 2 XL camera has a 98 DxO score (with the original Pixel scoring 89), which is the highest score of any smartphone camera. It has a 12MP rear camera with OIS (optical image stabilization), combined with HDR smarts. For selfies and video calls, there's an 8-megapixel front camera on both flagship phones.

Despite not having a dual lens, it still comes with Portrait mode, allowing you to take professional looking shots by blurring the background to make the foreground pop.

While most rivals achieve this with a dual camera setup, the Pixel 2 uses just one camera with a dual pixel setup.

For video recording, the Pixel 2 uses both OIS and EIS, giving you smoother, clearer footage. But there's no 60fps video recording capability like new Apple phones.

If you buy the Pixel 2 or XL you'll also get unlimited photo and video cloud storage - at full resolution - for life.

No surprise here, both the Pixel phones run the stock version of Android 8.0 Oreo out the box.

It's the latest version of Google's operating system, the Pixel 2 and Pixel 2 XL will be used to highlight the benefits of a pure Android experience. Also, Google has guaranteed minimum 3 generations of Android security and OS updates on Pixel 2 phones.