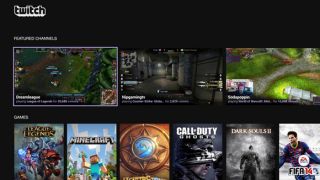 Amazon Fire TV has barely been out more than a month, and Twitch's video game broadcasting app has already arrived on the platform.

Twitch announced the new app in a blog post.

"Amazon Fire TV just got game!" the announcement reads. "You can now get the Twitch app on Amazon Fire TV and turn your big screen TV into your personal gaming theater."

The Fire TV version of the Twitch app lets users watch players' gameplay footage from other platforms, but unfortunately does not let them broadcast gameplay themselves from the device.

Twitch users on Amazon Fire TV can browse other users' channels and view their favorites, but can't stream their own gameplay.

That's a bit unfortunate, considering the way Amazon Fire TV is being positioned as something of a gaming platform (it even has its own game controller).

In any case, Twitch on Amazon Fire TV wasn't fully unexpected, as the service's icon appeared during Amazon's announcement of the set-top box, according to a Reddit user.

Meanwhile Twitch is also available on Xbox One, PS4 and a score of other platforms.