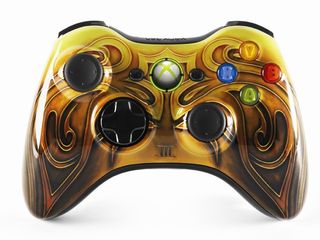 Microsoft has unveiled the Fable III limited edition wireless controller for Xbox 360, which includes access to an exclusive an in-game tattoo.

Fable III is a very big deal for the Xbox, with Peter Molyneux's Lionhead Studios already establishing the franchise on the console with its popular predecessor.

The Fable III limited edition wireless controller with be available in early October, to coincide with the launch of the game on 29 October.

"Feel the power of a monarch in your hands as you reign over Albion with benevolence or utter contempt.

"The Fable III Limited Edition Wireless Controller is a direct tribute to one of the core ideas behind the latest iteration of the franchise, bringing to life the regal crown of Albion – one of the many incredible pieces of concept art created during the production of Fable III."

"The hand-painted artwork wraps to the contours of the distinctive controller to create the perfect fit as fans journey from rebel to ruler in Fable III whether riding solo in this action-adventure experience or with another revolutionary by your side in dynamic couch co-op or over Xbox Live," it continues

The Fable III limited edition wireless controller has a UK price of £39.99, the game itself is available as a standard edition at £49.99 and collectors edition of £59.99.

People who pre-order will get a bribe of 1,000 in-game gold and a 'thrilling new quest'.