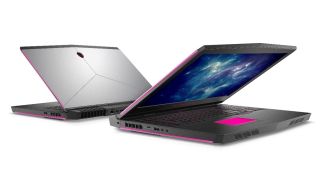 Dell, along with Alienware, its gaming-focus brand, has announced a range of new gaming devices that are aimed at enthusiasts and esports players.

As part of this announcement, it was revealed that Alienware 15 and 17 gaming laptops will now come with the choice of new 8th generation Intel Core processors, with i5, i7 and i9 variants up to six cores. These can be overclocked up to 5GHz – a first for Alienware’s laptops. According to Alienware these new CPUs will bring up to 10% better performance.

Overclocking laptops can be a tricky process, so to make things easier, the new laptops come with the Alienware Command Center, which was first glimpsed at this year’s CES 2018 event. The software is aimed at allowing anyone, no matter how experienced they are, at tweaking and overclocking the laptops’ performance.

Keeping the laptops cool is also a major consideration, and the new Alienware laptops come with much-improved cooling technology, known as Alienware Cryo-Tech v2.0, which features 50% thinner fan blades and a vapor chamber on the CPU to help keep the processor frosty.

The new Alienware 15 and 17 laptops also get a new color, called Epic Black, to go alongside the original Space Grey color option.

They will be available to buy online from the Dell store from April 5 in a variety of configurations.

Dell isn’t leaving all the gaming hardware to Alienware, and it has announced the new Dell G series, which it claims builds “upon a fierce commitment to deliver gaming solutions for players of all levels and budgets.”

While Alienware’s laptops usually target enthusiasts with large budgets, the new Dell G laptops, which come in the form of the Dell G3 15, G3 17 and Dell G5 15 are designed to provide plenty of gaming prowess while maintaining more affordable price tags.

So, you’re getting some pretty beefy graphics cards in the form of Nvidia’s GeForce GTX 10-series, as well as 8th generation Intel Core processors.

The Dell G5 15 comes with a GTX 1060 Max-Q graphics card with 6GB GDDR5 memory, up to 6-core Intel Core processors and even an optional 4K IPS display.

Going in on esports

It was also announced that Alienware and Dell are increasing their precence in esports, with hardware from both brands being featured in the NBA 2K League, the first official esports league operated by a US professional sports league.