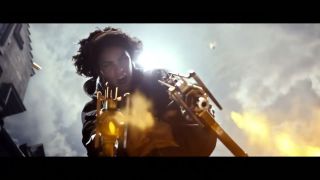 Bethesda spent plenty of time showing off some less than exciting games at E3 2019, with updates to Elder Scrolls Online and a new 52-player battle royale mode for Fallout 76. But they did announce one brand-new title, Deathloop, and it comes from the creative studio behind the Dishonored franchise.

Taking the stage the Bethesda's keynote, Deathloop's game director at Arkane Lyon, Dinga Bakaba, spoke about the new game: "Deathloop combines a mind-bending story with meticulously designed levels, and of course, Arkane's signature gameplay that lets you approach any situation any way you like."

While the studio only showed off a CGI cinematic trailer with some intriguing voiceover - no in-engine or in-game footage to speak of - what we did see gave us a sense of the sort of game we're looking at.

Deathloop will be a first-person action game, and Bakaba says it will be "different from anything we've done before."

The game is set on a frozen island called Black Reef, "where the party never ends," according to a postcard held by one of the main characters. The game will follow two assassins who battle each other on the island, along with plenty of enemies who seem in a state of constant riot.

Per the game's title, there is an ongoing loop. The trailer shows the two assassins, Colt and Juliana, killing each other over and over only to mysteriously resurrect and resume the fight. They seem to be stuck in a time loop, and the island of Black Reef has some peculiar equipment on it that might be the source of the time loop.

While the assassins seem to have plenty of weaponry at their disposal, they also appear to have special abilities. We see Colt effectively Jedi Force-push an enemy while Juliana appears able to blink forward a la Dishonored.

We've gotten the vibe this could be a game in the style of Bioshock but with the Groundhog Day time loop. And, since the game is centered heavily around two different characters, it may be that Arkane has plans to make it a multiplayer game, or allow players to pick which character they want to play through the game as, as was the case in Dishonored 2.