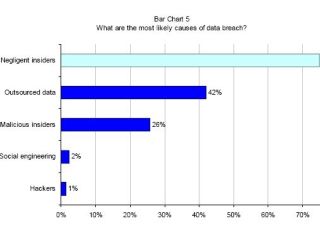 Hackers account for only a measly one per cent of companies lost data according to a survey in the United States – with negligence bar far and away the largest problem.

Although it is the ability of hackers to steal important data from companies that attracts the most media attention, a Compuware survey found that it was the smallest contributor to data loss.

In fact malice, including insider action (26%), accounted for only just over a quarter of the problem, with social engineering garnering another two per cent

Given the amount of civil servants who have hit the headlines for leaving laptops, discs and USB sticks on public transport or flogging old computers with the HDDs still crammed with important info, it was negligence that topped the survey.

An extraordinary 75 per cent of those surveyed pointed to human negligence as the biggest contributor to data loss.

So there you have it, why bother with all that hard work hacking into somebody's system when you could just wait for them to hand you the keys to the company database?