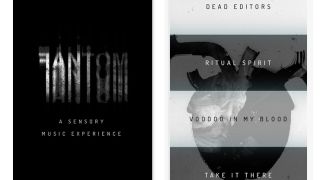 Massive Attack have released their new Ritual Spirit EP in unremixed form, but the tracks aren't actually to be found in the Fantom app.

An update for the app is now available, and will let you access the four new tracks but only through a redirect to the iTunes store.

If you don't want to buy the EP or any of the individual tracks, the whole EP is now streaming on Spotify and Apple Music. Either way, it's definitely worth a listen.

Massive Attack are back with a new tour and a promise of new material, some - if not all - of which is now available to hear through a new 'sensory remixer' app called Fantom.

The app, which was co-developed by Robert Del Naja (aka 3D) can be downloaded right now on iOS, uses the cameras, accelerometer, clock, location information and heart rate monitor (if paired with an Apple Watch) to produce a unique mix of each song.

Each track gives you the option to listen in a 'Personal' or 'Original' form, but right now only the Personal one is working - presumably to get people using the app's special features rather than skipping over it to hear the new tracks in their un-remixed form.

This week Twitter user @madotie leaked a picture the allegedly revealed a new Massive Attack EP titled Ritual Spirit. All those track names align with those found in the app, suggesting this is indeed the new EP we're listening to.

A new site has gone live here, explaining the purpose of the app.