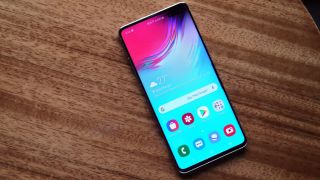 While we were expecting the Samsung Galaxy S10 successor to be the Galaxy S11 - that's just how numbers work, right - it sounds like it could actually be called the Galaxy S20, with Samsung taking a Huawei-like approach and skipping its flagship teenager years.

That's not the only part of its naming convention Samsung is said to be changing on February 11. Instead of following last year's structure of S10e, S10 and S10 Plus, we've heard the company is going to release the S20, S20 Plus and S20 Ultra.

Therefore what were once its middle and top-end products in the S range are now set to be the lower end of the spectrum instead.

By shaking up its naming system, Samsung is likely trying to make its product range clearer for the average customer while also making it more tempting for potential buyers. I think it's going to end up having the opposite effect and confusing the average person.

It's worth pointing out several things before I explain why. Firstly, Samsung is far from the only company that's employed a bizarre naming convention in the past – even last year Sony, Oppo, and LG all came up with confusing systems or oddly-named successors to phones.

While it's quite likely the new phones will be called the Galaxy S20 series, there's no official confirmation yet.

We've had the repeated assurances of leakers (many of whom have previously got information wrong), so we can't say for certain they'll actually end up called Galaxy S20 when they're in shops around the world.

Apparently, Samsung is naming the phone the S20 to line up with its launch year of 2020, but as the Galaxy S10 was the last phone, most people are going to expect the successor to be the S11.

Therefore, most people looking to buy the new Samsung, particularly people who don't follow tech news and are just looking at devices on a store shelf, might take the lack of an S11 to mean Samsung hasn't released a newer Galaxy S smartphone than the S10. That may mean they just immediately default to buying the S10 range instead.

There are some negative connotations of the S20 over S11 too. The drive to suffix products with ever-bigger numbers, exhibited by countless products and companies over many markets around the world, often ends up looking like a cheap marketing ploy rather than an actual indicator of a 'futuristic' device.

So by calling the phone the 'S20' instead of the 'S11', it feels like Samsung is trying to artificially elevate the 'wow factor' of its upcoming smartphones. This is something the average phone fan will easily be able to see through.

And the people who do think bigger numbers make for better phones? Well, they're going to be drawn to the mid-range Galaxy A90 instead.

Samsung may confuse people who don't follow its phone lineup meticulously, because by avoiding calling it the Galaxy S11, it seems there's no Galaxy S10 successor. Just look at the confusion felt by the lack of an iPhone 9, or Sony's messy 2019 lineup (the Xperia 10, then Xperia 1, then Xperia 5) as evidence of that.

Then, people who do know phones are going to find the S20 name a little trite and silly. Sure, if Samsung keeps the naming system for a few years things will sort themselves out and consumers are going to be able to understand the numbering system a little better – but those are a few years of potential missed sales.

It seems Samsung is following Apple's precedent with the suffixes of the S20 phones too. Instead of being a 'Lite', main and 'Plus-sized' variant, there's going to be a base device, with a bigger version and then an even bigger version.

Is copying Apple's iPhone 11 naming system such a great idea though? Many found the name iPhone 11 Pro Max a complicated name for a phone (Pro Max is an oxymoron!) and while Samsung isn't going as far as to call a phone the 'Plus Ultra' or anything, people who aren't well versed in the S20 series might have trouble working out whether the Plus or Ultra is the top-end device.

Some people may approach the range and assume it's got the same naming convention as the S10 series, where the phone without a suffix is the middle device, instead of the most affordable.

Having a flagship device with smaller and larger alternatives is the normal convention. Brands like Huawei, Honor, Xiaomi and Oppo all use it, and Samsung bucking this trend feels like a thinly-veiled attempt to copy Apple.

Whatever happens on the February 11 launch of the new devices, Samsung will have to be as clear as possible with consumers to ensure every potential customer understands this is the top-end device from the company for 2020.