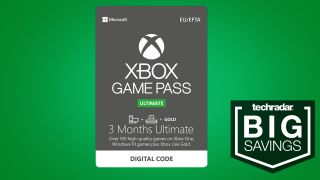 Just got a brand new Xbox for Christmas? Or maybe you're looking to set yourself up with some of the best Xbox One games ahead of the new year? Then this deal from Amazon is not to be passed up.

But the savings doesn't stop there. If you're a new Xbox Game Pass Ultimate member then you can combine this deal with Microsoft's promotional offer to get a whopping six months for just £17.

Xbox Game Pass Ultimate 3 month membership code: £15.99 at Amazon
Normally £10.99 per month if you're subscribed, this gets you three months of the best games-on-demand service around for around half the price. Play games like The Outer Worlds and Halo: The Master Chief Collection to your heart's content.

Xbox Game Pass Ultimate is Microsoft's game subscription service that gives you Xbox Live Gold and access to over 100 Xbox games on console and PC enjoy. Plus, activating Microsoft's initial promotional offer gives you one month of EA Access, three months of Discord Nitro, and six months of Spotify Premium. This is an offer not to be missed.

Remember, it's worth noting the initial Microsoft promotion is only for new members but current members can still pick up Amazon's offer.

Not in the UK? Here are the Xbox Game Pass Ultimate prices in your area: