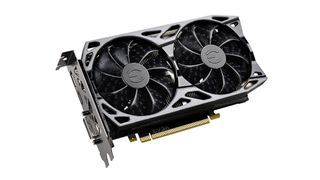 EVGA revealed its new GeForce RTX 2060 KO Gaming graphics card at CES 2020 carrying a major price cut, but now the GPU is up for pre-order, and you can get it even cheaper than expected at a supremely tempting $279 (about £215).

There’s a limit of two graphics cards per household, and the shipping date for buyers is pegged at January 13, the start of next week.

Sadly the RTX 2060 KO Gaming – or indeed the overclocked KO Ultra variant (with a 1755MHz boost clock, as opposed to 1680MHz) which retails at $299.99, again after a $20 discount – aren’t yet available for UK buyers, but EVGA’s European website notes that the cards are ‘coming soon’. So hopefully we won’t have long to wait, and more to the point, we’ll see a similar launch discount.

Over at CES, AMD was pushing the RX 5600 XT’s gaming chops, showing it comfortably outdoing the GeForce GTX 1660 Ti – but comparing it to the RTX 2060, well, that’s obviously a different ballgame (and don’t forget the RTX range also brings ray tracing cores into the bargain, above and beyond the GTX range).

Whether this is just EVGA acting alone, or perhaps the start of a more general move for Nvidia and partners to look towards reducing RTX 2060 GPUs is something we’ve already debated. But whatever the case, rival 2060 cards may need to think about shifting to match this kind of pricing regardless – or risk looking shaky value propositions themselves.

Those who’ve been sitting on the fence in terms of committing to RTX may well feel the compulsion to take the leap into the ray-traced garden, as it were, given the pricing of this particular 2060 model.

One thing’s for sure – it’ll be interesting to watch AMD’s reaction on the pricing front, and indeed other third-party Nvidia GPU manufacturers.