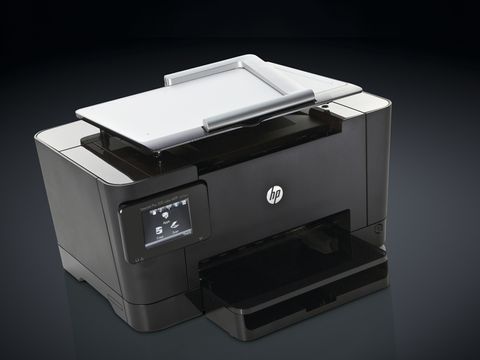 Hewlett Packard's TopShot LaserJet Pro M275 is a multifunction laser printer with a difference. Instead of a traditional flatbed scanner, HP's TopShot technology puts an 8MP digital camera on top of the device.

Located on a collapsible arm perched where you'd expect the scanner lid to be, it can capture images of 3D objects as well as flat pages. These images can then be printed, saved onto your computer or uploaded directly to the web.

The digital camera on the HP LaserJet Pro 200 Color MFP M275NW - to use its full name - sits 21cm above the white tray that sits on top of the printer, serving as a background for your photographed objects.

It works by taking six pictures at slightly different angles, three using the in-built flash and three without. These are then compiled into a single composite image, reducing the shadows and glare you'd get if a single exposure was used.

It's not the first MFD to swap its traditional flatbed scanner for a digital camera; the Lexmark Genesis S815 did so over a year ago, although it retained the flat glass form associated with regular scanners.

It's in raising the camera so it can take images of 3D objects as well as flat pages that the TopShot shows its innovation.

For small objects, the camera-based capture system works very well. Images are clear and vivid. Overexposure due to the flash is kept to a minimum, unless the object is very reflective.

It's less successful with taller objects that get closer to the camera, since perspective becomes a little skewed, giving a sort of fish-eye effect.

Flat pages (up to A4) are serviceable and readable, but not as good as you'd get from a traditional scanner, and capturing pages from open books can be problematic if they won't sit flat. The text tends to arc into the spine, making it ugly and difficult to read.

As a colour laser printer, it's fairly run-of-the-mill. Connectivity is through Wi-Fi, Ethernet and USB, and it's AirPrint and ePrint compatible.

A 3.5-inch colour LCD touchscreen makes setting up wirelessly much easier than the HP LaserJet Pro M175NW we reviewed last year, but the TopShot is similar in other ways, both good and bad.

Like its predecessor, the HP TopShot LaserJet Pro M275 has a relatively small footprint for a laser printer, making it well suited for home use.

But also like its predecessor, it's limited to a single paper tray with a capacity of just 150 sheets, restricting its usefulness as a shared printer in all but the smallest offices. Duplex printing is manual only.

Overall printing performance is a small step up from the M175NW. Text output is a little richer and clearer, colour documents more vibrant and photo images have greater depth (although they're still artificial-looking and lacking in reds).

The HP TopShot LaserJet Pro M275 uses the same toner cartridges as the HP LaserJet Pro M175. Prices have come down since we reviewed this machine, but print costs are still high.

A black ink cartridge currently sells £42 on Amazon and is good for 1,200 pages, giving an ink cost of around 3.5p per page. The three-colour ink cartridges now cost £48 each for 1,000 pages, so a colour document costs just under 18p per page.

If you don't do a huge amount of printing you might find this acceptable, but it's expensive for a laser printer.

The HP TopShot LaserJet Pro M275's innovative capture system is useful but ultimately niche, and the printer as a whole is adequate rather than amazing.

It might be welcomed by - for example - someone who photographs a lot of trinkets for eBay sales, but many would be better off with a more traditional multifunction printer and a decent compact digital camera.