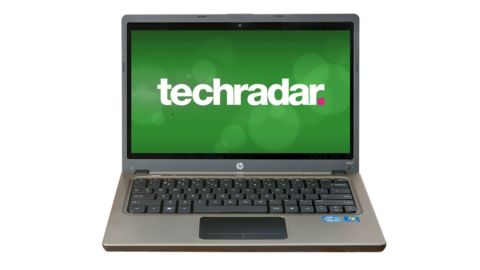 The keyboard is backlit, but the light doesn't kick in automatically. You have to hit the F5 key to toggle it on or off yourself

The glossy sheen of newness has yet wear off Intel's Ultrabook concept. But already we're seeing Ultrabooks begin to consolidate into numerous niches, including luxury systems, affordable sub-£600/$900 models for home use and more business-orientated kit.

Enter the new HP Folio 13, a cross between the classic corporate computer and the modern, ultra-portable PC laptop, priced at £849 in the UK and $999 in the US.

Compared to systems such as the Asus Zenbook UX31, the HP Folio 13 is a relatively sober-suited affair. It's more comfortable rubbing shoulders with the likes of the Lenovo IdeaPad U300S, with which it shares its Intel Core i5 CPU, or the Toshiba Satellite Z830-10U, which is priced on a par - at around £800 - and cuts a similarly restrained dash.

Then again, if you're paying with your own money rather than being supplied an Ultrabook at work, consumer model the Acer Aspire S3 costs less but has a faster CPU, so arguably offers better value for money. A lot comes down to the sort of system you want and the features you need.

That's not to say the HP Folio 13 is dog slow or brick-like in proportion. It is an Ultrabook, after all.

That means a maximum thickness of 18mm for 13.3-inch models such as the HP Folio 13. Qualifying for Ultrabook status also requires an Intel Core processor, minimum five hours battery life and a maximum of seven seconds to resume from hibernation. Achieving all that demands some pretty decent hardware.

Similarly, thanks to the latest Intel chipsets and platforms, even a business-orientated Ultrabook will have solid multimedia chops, including HDMI connectivity and Intel's HD Graphics, which brings at least tolerable 3D graphics acceleration and features such as QuickSync video transcoding.

However, the HP Folio 13's built-for-business remit does mean there are more powerful Ultrabooks to be had at this price point. Partly that's because it's more expensive, for instance, to ship it with Microsoft Windows 7 Professional than Windows Home Premium.

It's also led HP to make at least one rather odd choice when it comes to system configuration - more on that in a moment.

Security and reliability-related features such as the embedded TPM chip also push up the price without necessarily providing much benefit to mainstream consumers. Again, it's a question of being realistic about the features you really need.