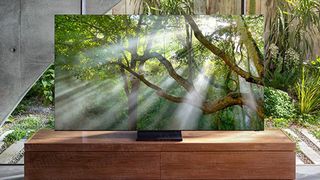 Samsung is looking to shake up its TV range with an outside-the-box design philosophy that could see the manufacturer use a practically-invisible TV frame to maximize the impact of its QLED displays.

The casing around the edge of the screen, or just the section of the screen that can't display images, is referred to as the 'bezel'; hence why the rumored set is being called a Zero Bezel TV. The leaked image was spotted by German tech outlet 4Kfilme.

We've seen this before, of course – notably with Samsung's range of Galaxy Edge smartphones, which made use of an 'infinite' display that curved over the edge of the casing for an expansive (if fragile) screen.

The TV display likely won't have a curved edge to the screen, though; we expect it will simply be a bezel so thin that a regular four or five feet viewing distance renders it invisible. We expect the name to something closer to 'Glass', 'Infinite' or 'Zero', rather than citing the bezel in the branding too – though the formal model numbers are said to be Q900T and Q950T.

The reports come via Sammobile, which cites South Korean sources saying that the TV has been internally approved for manufacture, and will enter mass production in February 2020, in a 65-inch size and possibly larger.

A Samsung employee reportedly told the site that, “Unlike other so-called ‘zero-bezel’ products that actually still had bezels, this product really doesn’t have a bezel. Samsung has become the first in the world to realize such an extreme design.” This is apparently down to Samsung managing to fuse the panel and casing of the television together.

Rumors are rumors, of course, but it would fit with what we've seen from Samsung before. LG, too, has experimented with the casing and form of its premium TVs, with an LG E9 OLED set that features an all-glass display, and really does help to make the pictures onscreen seem bigger and more impactful, without a firm edge hemming the images in – even if it can't get rid of the bezel entirely.

A bezel-less set would also be a neat counterpoint to the Samsung Frame TV, which features a hugely thick bezel for a premium picture-frame design – and varying the scale and visibility of the bezel across Samsung's 2020 range will continue to cater to different tastes.

CES 2020 is imminent, kicking off January 7, and there'll no doubt be some notable sets from all the major TV brands competing for our attention. Make sure you check back with TechRadar to see what Samsung does – and doesn't – end up showing off at the event.