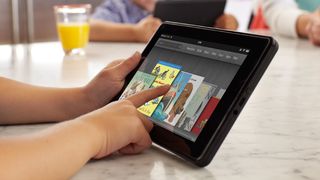 The upcoming Amazon Kindle Fire 2 tablet may be about to enter production in Taiwan after an order from the online-retailer was leaked.

According to sources in the upstream supply chain, Taiwanese chassis manufacturer Catcher has received an order from Amazon for a new Kindle Fire tablet.

No further details were provided, leaving us in the dark over how many units may have been ordered and what possible specifications Amazon's next tablet will sport.

It's thought that if the leaked order is real, and there's absolutely no guarantee that it is, then production of the Amazon Kindle Fire 2 could start very soon.

We reported at the start of the month that Amazon could be working on two variants of the Kindle Fire 2, a 7-inch model and a 10-inch version to compete with the likes of the new iPad.

The original Kindle Fire sold strongly in the US, mainly thanks to its low price tag, but it has failed to make it to the UK. We expect the Kindle Fire 2 to grace us with its presence here in Britain, as Amazon looks to tackle the global tablet market.

Check out our Kindle Fire 2 rumour round up below, for what you may be able to expect from Amazon's next tablet.