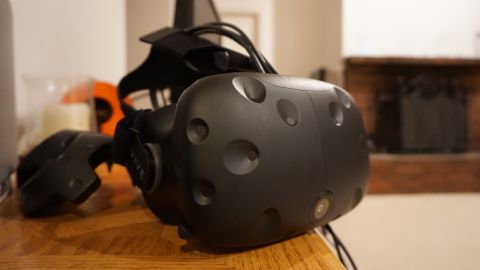 The finished iteration of the HTC Vive is best described as a bulbous visor taken straight from the pages of a science fiction novel. It's heavier (and therefore a bit less comfortable) than both the Oculus Rift or PlayStation VR, but the additional weight isn't something you notice once you're fully immersed in Vive's brave new world.

The headset is supported by three velcro straps that wrap around the top and sides of the Vive and meet in the back to form a cradle for your noggin. This cradle keeps the Vive from falling off or slipping too far left or right. And while they do a fair job of preventing major malfunctions, the straps are arguably the least user-friendly part of the Vive. Adjusting them while the headset is on is a difficult endeavor, and getting an exact fit takes a bit of trial and error. But, once you finally find a position that feels right, all that's left to do is turn the knob located on the right side of the headset to increase/decrease the focal length of the lens to reduce blurriness.

Three cords go from the top of the headset to a small hub that connects the visor to your computer. HTC has now got around to launching a wireless adapter to cut those cords, but the Vive isn't wireless out of the box – and the new adapter is another $299 / £299 on top of what you've already spent.

Thankfully the cords are at least neatly bundled together which means you only need to avoid one large, 15-foot cable instead of three separate smaller ones. From the small gray hub, you'll need to run one cord to a USB 2.0 port on your computer, another cord to an open HDMI port (something you might struggle with if you use the HDMI port on your PC for your monitor) and one power cable to an open outlet.

Like the Oculus Rift, the HTC Vive allows you to use your own headphones instead of forcing a pair on you. I picked a pair of Creative Sound Blaster H5s due to their padding and excellent sound quality, but the Vive welcomes anything from a pair of high-end Sennheisers to cheap earbuds.

Inside the headset is a 2160 x 1200 OLED screen that runs at 90Hz. For comparison, that's slightly less than the PlayStation VR's 120Hz refresh rate, but because the Vive is running off a more powerful GPU, it's not exactly comparing apples to apples. You can expect a 110-degree field of view, which is one of the largest available on any virtual reality headset and results in a more immersive experience.

The base stations, which are crucial to mapping the playspace and tracking you as you move about the room, should sit on a nearby wall or high shelf in order to do their job to the best of their ability. The latest version of the stations are smaller, wireless and make a dull hum that's almost inaudible unless you're standing right next to them. A minor annoyance I found is that the power cables for the base stations are a bit short, which in the end forced me to re-arrange my living room in order to place the IR cameras closer to an outlet.

Similarly the controllers are also much more versatile compared to the competition, giving developers many more tools to work with. Each controller has a clickable touchpad and a rear trigger that has two stages to allow for more refined interaction. While they're a bit bigger in stature than the Oculus Touch or PlayStation Move, the Vive's controllers function exponentially better than either.

The main buttons you'll need to familiarize yourself with are start and connect buttons located above and below the touchpad, two side buttons that can be pushed with your ring finger and the palm of your hand and the trigger on the back.

Moving around in-game might take a combination of pressing a trigger and the touchpad, using a trigger to jump from spot to spot, or physically walking from one part of the room to the other, depending on the title. While the Oculus Rift can track a playspace of around 5 x 11 feet and the PlayStation VR can spot you in an area of around 8 x 6 feet, the HTC Vive has a maximum tracking area of 15 x 15 feet. It's a substantial difference and one that takes VR from a sedentary experience to a truly immersive one.

Vive is not only immersive, but also strangely social thanks to an additional window that pops up on your monitor whenever SteamVR is active: it shows onlookers exactly what you're seeing in-game. I found this incredibly helpful when guiding my friends through games for the first time or for the times when I wanted my friends to see what I was seeing in VR.

So far I've used words like "immersive," "amazing" and "best headset on the market, bar none" when describing the HTC Vive. I could rant for pages and pages how much I've enjoyed my time with the headset but, without trying it for yourself, it's tough to fully appreciate just how close to perfect this technology is.

While other systems lag behind your movements or have a noticeable delay, the Vive can intelligently track exactly where you are in the room and what you're doing with your hands. That sounds like it should be a given, but you wouldn't believe how many demos I've tried where the system just couldn't figure out where I was standing or how I was holding my arms.

When you don't get one-to-one tracking, it's an absolute nightmare for your brain, creating a sort of cognitive dissonance that makes you feel both nauseated and unnatural. Now sure, there were one or two points during my two-week odyssey that things didn't go exactly right (I nearly vomited while playing a poorly rendered dungeon crawler), but those times were far fewer here than on the comparable hardware from Oculus or PlayStation.

The games and demos you'll experience on the HTC Vive range in levity, from casual, low-stress romps, to crazy firefights, to surgeon simulators and horror titles. Pulling off such a range without causing severe motion sickness is no mean feat, but the HTC Vive carries it off well.

Of course the number of games on offer has come a long way since the HTC Vive launched with a mere 49 titles to its name. More and more games are arriving on SteamVR all the time, and most of them are of a very good quality.

With all these games, it's a major boon for the system that switching between games takes seconds. To move from one game to the next, all you need to do is press the system button to pull up the SteamVR interface and then select another title to load up.

These are some of the experiences – both demos and games – I tried during my first two weeks on the HTC Vive, to give some context as to what I experienced:

The Lab: Best described as the Hello World of virtual reality, The Lab is a collection of demos developed by Valve that serve as an introduction to Vive's brave new world. Included in The Lab are four games that put you on a scenic, photorealistic mountainside; in the middle of Aperture's warehouse with a massive mechanical ballista; on the precipice of a castle; and inside a 3D version of Galaga.

Audio Shield: Audio Shield is a deceivingly simple game. First, pick any audio file from your music library. Then, once the beat starts, block the incoming colored projectiles with the color-coordinated shield in time with the music. It's Dance Central meets 300 in a very weird, but totally enjoyable music mash-up.

Vanishing Realm: Rite of Steel: Vanishing Realm fulfills the quota of one fantasy title needed to release any new system. In it, you're tasked to explore a cave and fight off the magical undead minions that have overrun the joint. Along the way you'll find swords, bows and arrows and wands galore that will help you get the job done.

Water Bears VR: I'm a sucker for a good puzzle game. Water Bears is best described as the virtual reality equivalent of Where's My Water? In it, you'll be asked to direct streams of colored water to similarly colored globes that contain the eponymous aquatic ursines. Direct the water to the right bubbles and the miniature creatures will bust out of their liquid prisons.

While 99% of my experience with the Vive has been an incredible look at the capabilities of virtual reality, there are some parts of the Vive VR experience that aren't as great as you'd hope – for one, there's still that damn wire connecting you to your high-end PC (unless you buy the wireless adapter), and it's easy to trip over it when you forget it's there. You can't blame HTC too much for this, as the Vive is streaming two distinct Full HD images without a hint of latency, and the gaming experience needs to preserved above all else.

But even Full HD isn't as clear as you'd want it to be – HTC calls it 'photorealistic', but you'd never struggle to tell the difference between a photo and the real world here.

That's not to say it breaks the immersion when you're in the VR world or even that it's overly grainy or pixelated – it's not. But objects in games aren't always completely clear when you really look at them. Now, that's a different story for local media played inside the headset via a virtual TV set up in a faux-living room but, in reality, I'm not sure putting a 1080p image on an $800 headset is a feature that's worth writing home about.

At this stage at least it's easy to tell the virtual world from the real one and, for some people, that might make the Vive come off as more of a novelty like Nintendo's Wii rather than the ground-breaking innovation that I see it as.