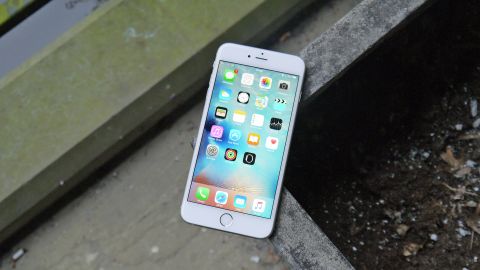 What do people like doing with their phone more than anything (well, apart from browsing Twitter or Facebook when they clearly have something else to do)? That's right, take pictures!

The iPhone 6 Plus has a decent 8MP camera, but Apple realized that it needed to step it up when the likes of Samsung and Sony are unleashing 16MP and 23MP sensors, and actually finding a good reason to have that high a number in there.

Just 12MP might not sound like a lot, but it means that the shutter speed is faster than ever, the clarity looks crystal clear on the larger 5.5-inch screen and the overall photography standard from the iPhone 6S Plus is improved once more.

Round the front the FaceTime camera has been boosted from 1.2MP to 5MP, which dramatically enhances selfie and video call quality. It also benefits from what Apple is calling 'Retina flash', which uses the 5.5-inch display on the iPhone 6S Plus as a light.

The screen flashes up to three times brighter than normal as it mimics a LED flash, lighting up your face for a well lit selfie.

With Apple's quest for svelte smartphone design, it's not been able to fully fit the camera inside the body, so as with the iPhone 6 and 6 Plus, the iPhone 6S Plus sports a small camera bulge on its rear.

This protrusion means the camera lens is more susceptible to wear and tear, but Apple has made a big deal about the super tough Sapphire glass it's covered it in to make sure it's protected.

Open up the camera app on the iPhone 6S Plus and the interface is instantly recognizable, with the horizontal bar of camera modes and large centralized shutter key.

Compared to its Android rivals the camera on the 6S Plus has a very limited selection of features, but Apple's going for simplicity and takes the adjustments into its own hands in an attempt to give you the best photo, every time, with minimum fuss.

There is some light control over the flash, HDR and timer, but the former two are best left on auto most of the time.

The new feature here is the Live Photos element, where the iPhone 6S Plus takes a 1.5 second video before and after your snap to bring a kind of Harry Potter element to things, which is cool - if not needed.

You can switch on Live Photos by tapping the middle icon in the top bar of the camera app, and in fact you don't have to actually turn it off. It's impressive the shutter speed isn't impacted when you're doing this. It's still as rapid as ever and the pictures are pretty amazing for a 12MP sensor.

When you head into the Photos app and starting scrolling through your shots, those which have been snapped with Live Photos will give you a second movement to let you know they're more than just a standard still.

If you fancy watching the full clip you'll need to '3D Touch' the shot in order to view it. In good light, and with a steady hand I was able to get some rather neat Live Photos - but it's something which is ultimately a bit hit and miss.

On occasions where my hands wasn't overly steady the result often looks blurred and cut up, while at other times part of the clip was me lowering the phone after the shot - making everything look like amateur hour.

Apple has confirmed it has a software update in the pipeline which will allow the 6S Plus to detect the camera drop, and edit it out of the final clip. Until then, you'll just have to be patient after hitting the shutter. And make sure you brace the handset before hitting the shutter.

The iPhone 6S Plus also has something the smaller iPhone doesn't: optical image stabilization.

The technology uses motors to make sure the sensor stays in place. With more stability the camera can let in more light without shaking - and with the iPhone 6S Plus, the same thing can be used with the video as well.

It's nothing new - a lot like the 4K video powers that the two new iPhones have been imbued with - but it does make the video a bit nicer to look at.

The iPhone 6S Plus is incredibly easy to use when it comes to taking snaps, and I found that most of the time it did a great job of working out the lighting conditions and adjusting settings behind the scenes for me.

If you do require some fine tuning then tap to focus and a rudimental brightness control can be dabbled with on screen.

In terms of results the iPhone 6S Plus is a step up from the 6 Plus, with larger, sharper images making for better viewing and keeping Apple competitive in the highly-charged, megapixel-dominated camera phone war.