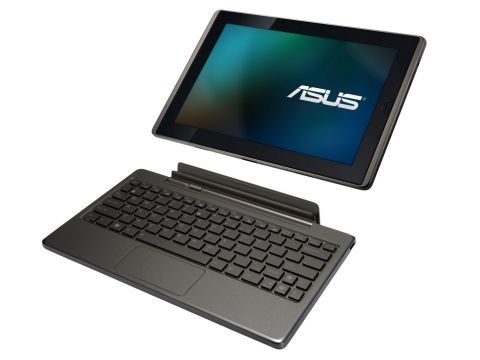 The Eee Pad Transformer is the best Android tablet yet

With every electronics manufacturer in the entire universe looking to release an Android tablet in 2011, individual products are all going to need some kind of unique selling point.

This is especially true with Android 3.0 products, because the vast majority of them are all packing near identical innards – namely Nvidia's Tegra 2 dual core CPU platform.

You can check out our Android Tablet round-up to see how this slate measures up against three of its rivals below:

The LG Optimus Pad, then, has its 3D camera. The Samsung Galaxy Tab 10.1V has its 8MP snapper. And the Android 2.3-toting HTC Flyer comes with its own Sense UI overlay.

So it makes perfect sense that Asus - the company that gave birth to the netbook - would seek to position its first Android tablet in a niche it knows well.

Ever since the iPad was unleashed on the world like an Apple-scented hurricane in 2010, the humble netbook's days have been numbered. But the problem was that until now, there wasn't a product that truly offered the functionality of a netbook and the portability, convenience and not to mention the pleasure of using a tablet.

The Asus Eee Pad Transformer TF101 is that product. With its detachable keyboard and trackpad dock, it's a powerful Android tablet while on the move, and a functional Android-powered netbook when you're sitting at a desk.

The back of the tablet and the keyboard is covered in a honeycomb-style texture, which makes it quite grippy to hold in your hand.

That said, build quality doesn't quite live up to the impossibly high standards of the iPad 2. The plastic bodywork feels mostly solid, but there's a fraction of give there that slightly undermines what is otherwise a very lovely-looking device.

Another small negative is the size of the thing. The 10.1-inch screen is surrounded by a black bezel and a further metallic surround, which makes the device almost 20mm wider than it would be without them.

It's also slightly heavier than some of the other tablets around. At 680g it's still not exactly heavy, and with the keyboard dock attached it feels about the same weight as a decent netbook.

And there is one enormous positive that we've yet to mention. The price.

The Transformer is available from as little as £379, while it'll cost you just £429 for the tablet and keyboard dock together. That means it's significantly cheaper than the likes of the Motorola Xoom, while offering arguably a lot more.

So does the Transformer offer the best of both tablet and netbook worlds? Or is it a horrible mess in the shape of the Acer Iconia Tab W500? We're about to find out.