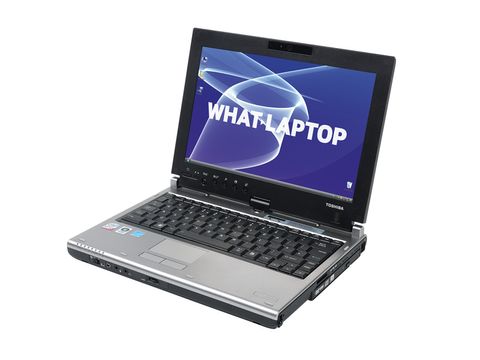 The clam-shell design allows you to use the machine primarily as a laptop, switching to tablet mode only when you need to write directly on to the screen

The Toshiba Portégé M750-10K (£1233 inc. VAT) doesn't stray too far from the notion of what a Tablet PC should be and is clearly a machine designed for the businessman.

The first thing you'll notice about this Tablet PC is how well made it is. The compact design weighs just 2kg, so it's ideal for carrying around, so Toshiba has added extra protection to the base and lid of the unit.

While not ruggedised, this machine has been designed with field-workers in mind, so you'll find it a tough machine to use. Using it outdoors won't be a chore, as the battery life offers more than four hours of life from a single charge. This is impressive considering the base specification of the machine uses a powerful dual-core processor instead of a low-voltage variant.

The clam-shell design, tablet screen and near full-sized keyboard have become the most popular format, as it allows you to use the machine primarily as a laptop, switching to tablet mode only when you need to write directly on to the screen. To do this, the screen sits on a central pivot that allows you to rotate the panel 180 degrees and fold it over the keyboard.

Running Windows Vista Business Edition, you'll find this machine is all set up to take advantage of the built-in Tablet PC functions. Instead of the more expensive digitised screen technology, Toshiba has opted for the more cost-effective touchscreen, which means you tap icons with your finger, or use the pen, which is conveniently slotted into the side of the machine, to write with.

The screen is a 12.1-inch panel that, due to the technology used, has a slight haze to it. That said, as long as you're looking directly on to the screen images are perfectly clear.

Multimedia is less impressive, but as this is primarily a business machine, such functions shouldn't play a large part in the buying decision.

The keyboard is small and compact, but we were impressed with how comfortable it was to use. Secondary keys are rather small, as are the touchpad and mouse buttons, but we found they all responded well.

You'll find this is a fully featured machine with an integrated optical drive and the webcam has its own built-in microphone, making web-conferencing a good deal easier to achieve.

Toshiba has also implemented its usual array of security features, so you find a shock-resistant hard drive and a fingerprint scanner, which sits neatly below the screen.

The Toshiba Portégé M750-10K isn't the cheapest Tablet PC on the market, but it makes up for it with a great, if a little utilitarian, design, versatile performance and a highly usable battery life.