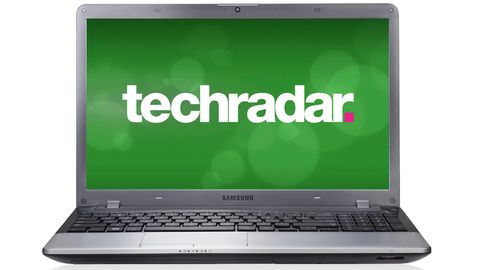 These days, we're surprised when a laptop that's more than 2cm thick and weighs more than a couple of kilograms comes across our desks. Ultrabooks such as the Asus Zenbook UX32A, HP Envy 4 Ultrabook and Samsung Series 5 Ultra seem to have almost completely taken over.

With all the flash behind these new designs, it's easy to overlook something such as the Samsung Series 3 NP355V5C-S01. Intel is powering the Ultrabook boom, but we've got an AMD processor in this 15.6-inch laptop. SSDs are the hot technology, but here Samsung has swapped speed for a huge hard drive.

But the Samsung Series 3 reminds us what a premium we're paying for the convenience of thin and light laptops. For £599 (about AU$938/ US$967), you get a quad-core processor from the high-end AMD A10 'Trinity' APU, with a dedicated Radeon 7670M providing some graphics grunt (though the A10 has a built-in GPU it can use to save power).

You also get a healthy 8GB of RAM, while a generous 1TB hard drive means that you'll have plenty of space to store videos.

In fact, the Samsung Series 3 looks initially like it should score a home run as a multimedia machine. But two things hold it back slightly: the 1366 x 768 screen can only display 720p HD, not 1080p; and while there's a DVD drive, there's no Blu-ray support.

Samsung has used the extra space to squeeze in a number pad to the right of the keyboard, and has moved the trackpad over to the left, so it's in line with the space bar.

Along the sides of the machine, you'll find a reasonable array of ports: VGA, HDMI, Ethernet, two USB 3.0 ports and two USB 2.0 ports, along with the DVD drive. There's also an SD card reader tucked tidily away beneath the curve at the front of the machine.

In terms of looks, the Samsung Series 3 is simple silver and grey plastic on top, with a pattern on the lid that's faintly reminiscent of brushed metal. It's all fairly understated, and wouldn't look out of place at home or in an office.

You will notice very quickly that the shiny lid picks up a big smudge every time a finger goes anywhere near it, though.

For its price, the Samsung Series 3 355V5C-S01 offers a seemingly tantalising list of specifications. A quad-core processor, discrete graphics, lots of RAM and a hefty hard drive… what's not to like?

The processor is AMD's top-of-the-line A10 CPU, offering four cores running at 2.3GHz, though they're capable of running at up to 3.2GHz when needed.

The A10 is interesting for spec fans, because it's AMD's first Piledriver chip, which is the step after the promising but disappointing Bulldozer technology we saw from the company.

We won't go into the minutiae too much here - you can get all that from our AMD A10-4600M review - but the important thing is that it's faster than AMD's previous processors, and should bring better integrated graphics performance.

In the case of the Samsung Series 3, though, you won't be reliant on the integrated Radeon 7660G graphics for your gaming needs - there's a discrete graphics card in the shape of the Radeon 7670M.

Now, you might wonder how much of an improvement the graphics can be if the model number is only 10 better, and actually, the two graphics chips are pretty close to each other in terms of performance. However, the two are able to combine to theoretically increase performance dramatically over a single integrated graphics chip.

Naturally, this brings a larger power draw with it, but Samsung and AMD have provided power options to ensure that your computer only uses as much power as it needs when on the battery.

This is all backed up by 8GB of DDR3 RAM, which should offer plenty of headroom for multItasking or editing home movies. And it's more than enough power to run Windows 7 Home Premium.

Though there's no SSD here for instant operating, there are a few built-in software optimisers for booting the Samsung Series 3 laptop quickly and waking it from sleep rapidly.

Instead of a fast solid-state drive, you get a generous 1TB hard drive, offering plenty of space for storing music and movies. It's only a 5400rpm drive, instead of the faster 7200rpm drives you might get in a desktop, but that's standard for laptops.

Backing up and transferring files can be done very quickly with the built-in USB ports. It's a bit of a shame that only two of the four are the faster kind, but it's much better than none.

Along with the SD card slot, Ethernet port, VGA and HDMI video outs and microphone and headphone jacks, there's a good selection of ports on the side of the Samsung Series 3.

There's also the DVD drive, of course, though there's no Blu-ray support. As we mentioned, though, the screen doesn't support Full HD 1080p, so you won't be missing the Blu-ray much anyway. The widescreen display is 1366 x 768, which isn't that unusual for this price, but it's a bit of a shame.

Internet connectivity is handled via either the Ethernet port or built-in Wi-Fi adaptor, supporting up to 802.11n speeds. There's also Bluetooth 4.0 support.