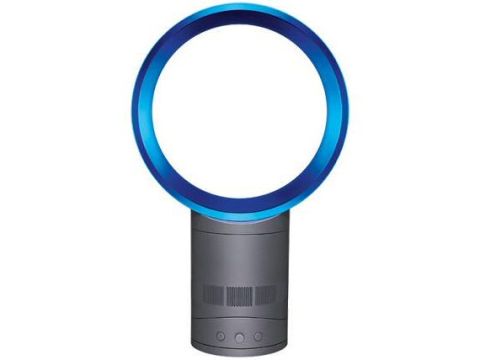 The Dyson fan (Air Multiplier) was announced in the autumn of 2009 and caused quite a stir.

What is it? What does it do? How does it work? There were just a few of the questions that circulated Twitter at the time. It looked interesting and high tech, and people were excited.

However, the fact remains that the Air Multiplier was and is a desk fan. It does what all desk fans do – it blows air. It just does it in an original way. And it's this original – novelty, if you will – method of generating an indoor breeze that Dyson wants to charge you £200 for. So, is it worth it?

How the Dyson fan works

Dyson's fan works by drawing air into the base at up to 27 litres per second, using a turbine. This air is then channeled through a small slit in the circular ring on top at up to 55mph.

The air is blown forward through the ring and out towards your face, while the air surrounding the ring is drawn into the airflow as well. Dyson claims that 15 times as much air ends up in the air flow as actually passes through the turbine itself, making it super efficient.

We don't buy it. There's clearly a lot of clever science going on here, but in practise the Dyson fan is still just a fan which blows air – it just does it without blades.

It's not even particularly quiet – turn it up to the maximum setting and you'll be absolutely deafened by white noise.

So, is it good value? At £200, the answer has got to be no. It looks great, and it does have some advantages over a standard desk fan. But really, if you're hot this summer, you can buy a perfectly decent bladed desk fan for £15 online - spending £200 on a Dyson is just silly.