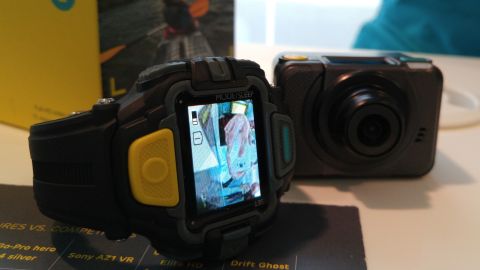 EE has taken the strange move to enter the action cam market, but it's first attempt is offering some unique features such as 4G live streaming.

EE has been revealing new hardware left, right and center for the last year with in-car Wi-Fi devices, phones and tablets galore – but no-one really saw this coming.

The next device from EE is an action camera designed for those who do extreme sports and want to show off their activities to the world through live streaming.

It's called the 4GEE Action Camera - catchy right - and it's set to do battle with the likes of GoPro and Sony in the world of small, compact and durable shooters.

This isn't made to look particularly pretty. EE has designed this camera to take a few knocks if you're out doing some active live streaming. You're meant to be diving off of cliffs, throwing yourself around in the sky and landing on a big pillow when using this little beast.

On top you'll find a blue power button, with a yellow one on the other side to record. Once you're in the menus these then turn into navigation buttons but there's not really much to do in these menus.

You're just looking to hit record, live stream and maybe pause for a few moments.

It's pretty chunky compared to some of those offered by GoPro, but I expect that's to pack in all the connectivity technology needed to make the live streaming element possible. If you're using one of these you don't need it to be particularly slim, I'd rather have it feel tough and sturdy.

When the 4GEE Action Camera is in its protective case you can throw it around without worrying about it getting damaged. It doesn't look great but it means your camera is more likely to survive the rough and tumble you're going to put it through.

Pictured above is the head connector so you can stick it onto a helmet as well but you'll have to buy this separately.

The EE Action Camera is capable of recording in Full HD as well as taking 13MP stills. There is also the option to record in 60fps to give actions videos a much faster look.

I didn't get the chance to record on the device but we saw some live footage from the top of Wembley stadium that looked great. Look at this guy without a harness wandering around on the iconic white arch.

There was some internet connectivity issues for a little while, but after a few moments it settled down and we were in the Full HD stream where the content looked great. If you were watching on a phone screen you'd be delighted with the quality. Obviously that all depends on the internet quality as well - will you be able to do this kind of streaming directly from Mount Snowden?

This is the first action camera available on the market that can stream directly to the internet. You'll be able to use 4G, 3G and even lower signals to stream your content directly to a service called Skeegle.

There is currently no intention at EE to spread out with further live streaming sites so you'll have to be signing up to a Skeegle account in order to live stream directly.

EE claimed live streaming Full HD content to the service would take 1GB of internet for every hour streamed, which isn't bad.

If you're not intending on live streaming your antics you can just record directly to a SD card up to 64GB. From the looks of it there isn't any on board storage here to record to. EE did push the fact you can then upload your footage to any social networking site you want to from there.

In the box you'll find a few accessories to accompany the 4GEE Action Camera. One of them is the hardy case to protect the camera. There isn't much access to the ports around the camera so you'll need to take it out to get to your SD card. But it does means it's waterproof meaning it can survive up to 60M of the wet stuff.

From there you're able to switch up your recording by pausing footage, sharing it to a livestream

EE's Action Camera is an interesting concept – being able to stream in high quality from an action cam is a brand new idea and will work wonders for those who are into their extreme sports.

The issue is where you'll be using it though – will you get a full connection when climbing a mountain or will it be possible to use it on the other side of the planet?

All of this remains to be seen but it'd be a much more interesting concept if it was a little cheaper.

You'll be able to pick up the camera from June 16 with a launch deal of £10 a month for 24 months with a free camera. Getting the camera for free is a great bonus but does anyone really want to pay a monthly fee for an action camera? You're going to have to use it quite a bit to do that.

If you're buying it outright it'll cost £299.99 - more than some other action cameras from bigger names, and certainly more than the HTC RE.

If you're into extreme sports and sharing your life in that way though, the 4GEE Action Camera will be right up your street.