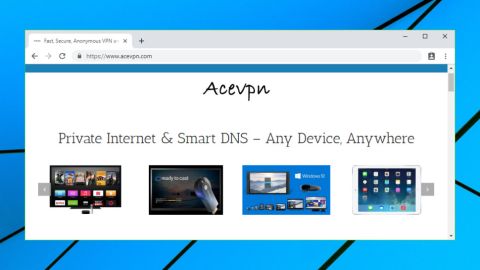 Acevpn scores in a few areas, but overall it doesn't have the features or functionality we expect from a modern VPN.

Acevpn is a small VPN with a very mixed set of features, weak in some areas, but more capable elsewhere.

The company claims its Smart DNS system can unblock more than 100 streaming sites, for instance, including Hulu, Netflix, BBC iPlayer and Sky.

Support for OpenVPN, IKEv2, IKEv1, L2TP and PPTP ensures you should be able to set up the service on just about everything, while the Obfs-based Stealth protocol might get you online in China, Iran and other countries which actively block VPNs.v

There's a major problem in the lack of any native clients. You can't just download an app, and go - instead you must follow tutorials to set up your devices manually.

Acevpn's network has an average 50+ locations spread across 26+ countries, but they're well chosen, particularly for Western users, with locations in 16 European countries and 13 US cities. There are only four Asian countries on the list - Hong Kong, Singapore, South Korea, Japan - but there's a scattering of coverage on other continents, with servers in Australia, Mexico and South Africa.

While this sounds great, there's a problem. To get all these features you must sign up for Acevpn's Ultimate VPN plan, which is eye-wateringly expensive at $15 billed monthly, $13.75 on the annual plan, $12.50 over two years or $11.66 over three. To put that in perspective, the premium ExpressVPN is priced from $8.32, and signing up for three years with CyberGhost costs just $2.50.

Acevpn's Premium VPN plan offers just 20+ locations across USA, the UK and France, drops support for P2P and may have reduced performance, but the price is more acceptable. Paying monthly costs just $5.95, half the price of many VPNs, falling to $4.58 on the annual plan, $4.16 over two years and $3.88 over three.

A 7-day money-back guarantee offers a little protection, although we were surprised to see there's a '$1 processing fee'. Uh, why? If you boast about a 'money-back guarantee' on your website, then customers are entitled to expect all their money back, not whatever is left after hidden deductions.

This wasn't the best of starts, but with a low monthly cost of just $5.95, Acevpn's Premium plan may be worth a look, especially if it can unblock the sites you need. We decided to check it out.

Most VPN providers understand that customers like to preserve their anonymity, but Acevpn hasn't entirely got the message. When you sign up, for instance, the company doesn't just ask for your email address: it wants your name, physical address and phone number, too.

That's just the start. The small print suggests that the company may 'call you to check the validity of your phone number', or 'block access' to its network 'until you send us a scanned copy of your passport, ID card, or driver's license.' But, don't worry, the company has advice on how to proceed: 'If you want to avoid such issues, make sure that your registration is done properly (as in: no fake information), and eventually, send us a copy of your photo ID document just right after your registration.' Thanks. But no, thanks.

There are no other big VPNs which are anything like this intrusive, but the company hasn't finished yet. Acevpn's privacy policy explains that at least some of this information may be shared with 'other companies or individuals to provide certain services to or on behalf of us such as server management, security audit, analyzing customer lists and data, or performing marketing or consulting services.'

Acevpn's logging policy looks a little more acceptable, with the FAQ page stating: 'We do not log period. No meta-data logging, no traffic logging, no bandwidth usage tracking. We are a no logs VPN service.'

The privacy policy has a paragraph on this topic which essentially says the same: 'We do not log VPN traffic. We do not spy on our users nor monitor their bandwidth or Internet usage. Our VPN servers do not store any personal identifying information (PII).'

There is some good news in a ‘transparency report’ on the "the governmental requests [Acevpn] has received to disclose information about our customers." This states that the firm has never been served a warrant, or had any searches or seizures, or turned over any SSL keys, installed a back door on their network, "terminated a customer or taken down content due to political pressure" or "provided any organization a feed of our customers’ content transiting our network."

This all sounds very reassuring, but there's no way to tell whether Acevpn is doing what it claims. If you're concerned about a provider's privacy and no-logging claims, you might prefer to look out for companies such as TunnelBear, VyprVPN and NordVPN, who have put themselves through public audits to verify their privacy-related promises.

Acevpn's website doesn't begin to compare with the best of the competition. The customer portal is plain, and seems to be based around the WHMCS system often used by web hosts; the knowledgebase is small and outdated (the latest Windows setup guide refers to Windows 8); there's no live chat, and although you get a forum, it listed just five 'active discussions' in the six months prior to our review.

With no clients, setup is more of a hassle than usual, but experienced users will figure it out without difficulty. An OpenVPN Download tab enables choosing a platform and port, for instance, and we were able to download all our available location files with a click.

A separate Unblock TV panel displays Acevpn's Smart DNS server IPs, which you must copy for reuse in your individual devices. Again, that's not difficult if you're happy to browse router and other settings pages, but it's likely to baffle novice users.

We downloaded the OpenVPN setup files for our Windows 10 test system. Our Acevpn Premium plan supports only three countries (UK, USA, France), but there were files for both UDP and TCP connections. These are set up to allocate a random location from a fixed list, so for example connecting to the USA might allocate a server from any of 12 US cities (New York, Miami, Atlanta, Dallas, Los Angeles and more.)

We didn't try this, but as the Premium account supports city-level locations, it should be possible to create OpenVPN configurations for each of these, allowing you to choose to connect to New York, Miami and so on. This will require some editing of the existing files, but it's not difficult. The current files contain multiple lines beginning 'remote' and specifying the various locations they support, and all you have to do is delete everything but the location you need.

Acevpn had mixed results in our unblocking test, failing to give us access to BBC iPlayer, but immediately allowing us to stream US-only Netflix content.  That's a good start, and it's possible that Acevpn's Smart DNS system will unblock more sites.

We ran some automated tests on our three Acevpn Premium locations and found connection times were speedy at 2-4 seconds, ping times were normal, and all servers appeared to be based in their promised countries.

As we mentioned above, by default the standard Acevpn configuration files allocates servers from random cities within in a country, and we found that could make for hugely variable performance.

This wasn't an issue for our local UK servers, where both delivered a capable 60-65Mbps on our 75Mbps test line.

It was a different story in France, though, where one server averaged 65Mbps, while the other managed just 30Mbps.

US servers were generally acceptable, with most giving us around 20-30Mbps, but one barely reaching a sluggish 5Mbps.

You could work around this by deleting the slower servers from the configuration files, and that should ensure Acevpn generally gets you decent speeds. Or you could upgrade to Acevpn's costly Ultimate VPN plan, which apparently gets you access to a 'fast gigabit network.'  But it might be easier to just choose one of Acevpn's top competitors, where you'll typically get better speeds and many more features for a fraction of the price.

Acevpn does some things right, particularly with its Netflix and other website unblocking, but the lack of apps, the basic service specs and awkward manual setup lets the service down. The company needs some major investment before it can begin to compete with the top VPNs.