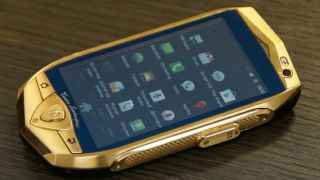 Vulgar - We can only assume that this £1770 Lamborghini phone is the result of good taste and good sense engaging in a quick murder-suicide. [Gizmodo UK, High.Tech.Mail]

Threepac - Plans to eke more money from the memory of Marilyn Monroe by reanimating her as a holographic (except, yes, we know, not really holographic) representation of her former self have hit a snag. The snag being that her estate is dead against the plan, threatening Digicon Media (the company that holds the 'rights' to it) with legal action should it go ahead. For future reference, OMT does not want to be reincarnated in any digital manner after it dies. Thanks anyway. [The Hollywood Reporter]

FaceLion - Apple announced a thing or two yesterday, including Facebook integration into its Mac and mobile OSes. Sadly for Mountain Lion users, the baked in social networking won't be coming to the Mac OS until 'this fall' despite the software getting its official release next month. Fall, of course, is American for autumn. [9to5Mac]

Chore - While some people devote years of study and research to curing cancer and world peace, others opt for solving the rather more pressing problem of domestic laziness. Enter the self-making bed. Put us down for two. [Stuff]

Maximillian - Android's getting in on the Max Payne action at last, with the original iteration landing in Google Play on June 14. The hold-up is all down to the myriad Android devices out there, while good old uniform iOS handsets got the port way back in April. [The Verge]

Doing it wrong - Careful how you hold the Samsung Galaxy S3 - you don't want it to go all iPhone 4 on you. [Don't Hold It Wrong]

Life, oh life - "I had this dream last night. The Nazis were back except this time we had Twitter and then we made a slide out of plasticine and the queen made us eat it." As OMT has just proved, there's nothing more tedious than hearing about other people's dreams. Which is why we probably won't be downloading Dreamt It, an app intended to let you capture and share your dreazzz... [IntoMobile]

Modern life is rubbish - Here's a story we yearn to mock but can't because there but for the grace of god etc. Hannah Metcalfe has such a severe sensitivity to electromagnetic, er, stuff that she can't use a mobile phone, an iPad or even go near Wi-Fi or fluorescent lights. Sorry yes, this is a Daily Mail story, but just imagine. What if Wi-Fi is slowly doing this to all of us? What if one day we have to revert back to dial up? WHAT IF? [Mail Online]

Sol - It has emerged that Kodak used the 13-month International Fixed Calendar until 1989. See Kodak, it's stuff like this that led to your downfall, you great kook (although we can't help but approve of the additional month named Sol). [Peta Pixel]

Once in a lifetime - Spotify for Android has exited beta and made its way to Google Play. So, there's something to write home about. [Spotify]