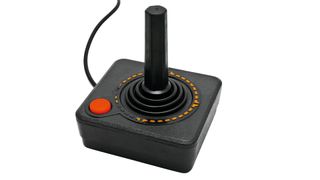 Atari - old enough to be your dad

Game on - Atari has made it to the grand-old age of 40 without once falling into the Pitfall of being seen as a rubbish console. It made its

for other videogame manufacturers, offering the ultimate

fix for those looking for content to entertain the

The release of the original console luckily didn't make a Pong like the Atari Lynx did when it was released – which is a good thing as the whole Atari franchise would have gone Kaboom! before it even began.

To celebrate Atari's birthday, the iOS game Atari's Greatest Hits is available to every Pac Man and woman who own an Apple device. Our advice: download it now and don't worry about there being 100 games as they aren't Space Invaders – each download only takes up just a few kilobytes of space. [App Store]

Call that a knife? - Breadmaker Warburtons has decided that there aren't enough gadgets in the world and has created its very own heated knife. Now, this isn't a knife you use to mug someone on a cold winter's day but one that cuts through even the toughest slab of butter. It may be a prototype for now, but this is definitely in the 'gadget you never knew you wanted but need right now' category (note: we may have to find a catchier name for this category).

(Up)load of crap - The MegaUpload saga continues with news that the New Zealand courts reckon the Megaupload raid – which saw Kim DotCom's millions seized, alongside fancy cars and other such niceties – was invalid because the warrants used were general ones and not super-duper-we-are-catching-a-web-mastermind ones. Sounds like the NZ courts are taking a liking to this DotCom fella – we reckon a cameo in the upcoming Hobbit film beckons. Bilbo MoneyBaggins, anyone? Nope, didn't think so. [BBC]

Stop start - Microsoft has finally given us the answer we all wanted but were afraid to ask for. No, not 'was the exec who came up with Mr Clippy hung, drawn and quartered for his actions?' but the reason behind Windows 8 ditching the Start button. Apparently it has to do with 'trends'. Pfffft. [The Verge]

Fortress of amazing-tude - Team Fortress 2 is still a popular game, despite it being a bit long in the tooth. And that is why the recent patch, which brings a Pyro-like view to the game, is superb. It includes: flowers, rainbows, musical death-instruments and lots of fire. Brilliant. [Team Fortress]

Shirty with Google - There was us thinking that Google blew everyone away with its IO conference this week, which featured sky diving, a new tablet and a Sonos-like streamer. But it seems the search giant dropped the ball by giving out t-shirts that were only made for small men. There were no women's t-shirts in sight and this has upset Alex Maier who attended the event. Google has responded saying it will make sure there are women's sizes in future which is a great bit of quick PR thinking.

On a side note, our team complained that there weren't enough jelly beans. We have received nothing from the web giant as yet (hint). [Wired]

I am the law - We already thought all lawyers were robots sent from another planet to defend all that is good and great in the world but apparently they are not. Until now, that is - there's a new piece of software that manages to do 20,000 man-hours' paperwork in just two weeks. Sorry Atticus Finch, your time is up. [Gizmodo]

Pilot's life for me - BT's broadband is set to get super-speedy and it has just announced the towsn that are set for the speed boost. They are, in the order of hardest to massive softies: Edinburgh, High, Wycombe, St Agnes and Cornwall. And in 2013, the good people of Watford, Cardiff, Basingstoke and Manchester will also be able to trial speeds of up to 330Mbps. Which is almost as fast as Usain Bolt... hang on, that sounds like an awesome marketing idea. [Engadget]

Pico, man - Aiptec has decided that what our mobile phones need are a bit of Pico-loving and has created some rather nifty projector add-ons for iOS and Android phones that allow you to project stuff on to walls. We're guessing this 'stuff' is presentations and the like but whatever you decide to show, prepare from the inevitable bunny ears to ruin the whole thing. [Inquirer]

Scorsese quits film - Martin Scorsese has decided that film is dead and that he will only shoot digitally from now on. His latest movie, The Wolf Of Wall Street, is set to be shot strictly in digital but interestingly there's no 3D around this time. Wonder if this had anything to do with Hugo's criminally poor box office performance? Or the fact that 3D is just a bit 'meh'? [Empire]