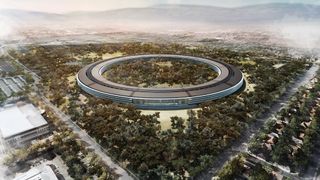 Apple counts down to the launch of its space-age office

In the world of tech, where you work is just as important as who you work for. Buoyed by bulging budgets and filled with design-led forward thinkers, these crazy tech HQs make for some of the best places to work across the globe.

Join us for a whistle-stop tour of some of the maddest, most awesome headquarters from around the world of technology.

The undisputed king of the crazy workplace has to be Google. But it's not just Google that's taken your average cubicle-fest and turned it on its head.

From Facebook to McLaren, Apple to Airbnb, having an awesome office helps tech companies attract the best and the brightest. And who wouldn't want to work in a buzzing environment that more resembles a high-end apartment than a boring office block.

Like the mighty Googleplex in Mountain View California, most of the search giant's offices have a touch of the wild about them. A great example is Google's bachelor pad-look-a-like London Victoria office, which features an indoor park complete with a rowing boat, a recording studio, pool tables, and write-anywhere whiteboard-walls.

Then for meeting spaces, your average conference rooms have been swapped out for a collection of sofas and deckchairs, making hashing out the specifics of the next Gmail redesign all the more innovative.

It was the brainchild of Henrique Penha, Android's lead designer, who designed the breakout rooms and office layout to make people sit, and therefore think, differently.

If that wasn't enough, it's also got a roof terrace with one hell of a view over central London, for when the Sun's out, or the 'nine to five' turns into after-work drinks.

The new trend for swanky offices isn't lost on Microsoft either. One of its newest offices, Skype's new EU headquarters in London, is also filled with fancy furnishings, amazing spiral staircases, indoor courtyards, and a couple of pool tables thrown in for good measure.

Of course, being Microsoft, there are still a few regular desks and Skype conference rooms dotted about the place, for when the sofas just don't cut it.

While still in the initial stages of development, Apple's planned 'spaceship' campus in Cupertino California ranks highly in the mad tech HQ stakes. If artists' impressions of what the final building will look like are anything to go by, this thing will resemble the best of sci-fi spacecrafts.

The four-storey, completely circular building includes a massive open space in the middle, filled with fruit and olive trees. Once finished, it will be a Mecca for Apple engineers, shielded from the outside world by 12-metre-high walls of glass.

Covering over 64 acres, it'll house 14,000 staff and will attempt to be self-sustaining, generating all its own electricity. The plans show that cars will be funneled into underground roads, meaning the complex will look more like a nature reserve than an office block. The project, estimated to cost somewhere in the region of $4-5 billion, is expected to break ground this summer, with a completion date of 2016.

Facebook, having already out-grown two headquarters in California, moved into a large office complex previously owned and operated by Sun Microsystems in Menlo Park. But, of course, being the young tech company that it is, plain and boring wasn't an option. Facebook had Gensler, an architect and design firm, essentially recreate the buzzing, urban downtown location where Facebook first started.

Filled with food outlets for almost everything under the Sun, as well as coffee places to make sure all the Facebookers are properly caffeinated, the whole complex has been designed to allow co-workers to blend with one another from disparate parts of the company.