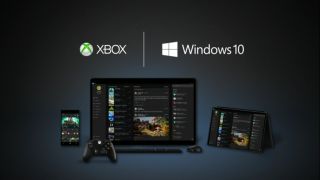 For many PC gamers, DirectX 12 was the main thing that drove them to install Windows 10 on their gaming rigs, and we can't blame them. But, with the Xbox Summer Update months past and now the newly-launched Holiday Update, it's clear Microsoft doesn't intend to rest on those laurels.

Of course, that's the attitude we want to see, because according to Microsoft Xbox & Windows Gaming Platform Lead Mike Ybarra, things are on the up-and-up for the Xbox App on Windows 10.

"We’re happy with the growth level, but we don’t announce usage numbers per se – it’s in the millions," Ybarra tells us when asked how adoption of the app is going. "We have a lot of high engagement there. We’re happy with it and we continue to invest in it."

This Holiday Update – rolling out to Xbox One and Windows 10 now – brings plenty of new features to the Xbox One, like the Clubs tool to join groups of friends together in cross-game chat, the Looking For Group feature that lets players post essentially help-wanted ads for their mutliplayer pursuits and neat additions like group messaging, Achievement rarity listings and a Gamerscore leader board.

Naturally, all of those enhancements are coming to all Windows 10 PCs through an enhanced Xbox App. Better yet, if you play games on both platforms, they'll work not only in exactly the same way on each, but in some cases between and across them.

"It’s important for us as we bring new features cross-platform that we make it as consistent as we can," Ybarra says. "Sure, there are going to be some differences, but in general that base-level familiarity is a goal that we have when we design the features."

Clubs is basically what Microsoft is calling its group-based chat system. In short, it allows players to create custom groups with support for both voice and text chat.

From within a Club, players can organize in real time, say, which game they're going to play next. Players can share content from within the group, too, with one player being designated the admin.

The idea here is to bring the same sort of asynchronous and real-time coordination tools that many have found on Facebook or other social apps to be useful for this sort of thing – guilty as charged: we used to use Facebook to organize World of Wacraft raids – right into the Xbox interface.

The key point here for PC gamers, though, is that this feature works not only on both Xbox One and in the Xbox App on Windows 10, but across the two. Club members on both platforms can chat either via voice or text in real time.

Of course, this will be a boon for the games that support play between Xbox One and Windows 10, but what about the myriad games that don't?

"I expect users to check-in on their Club, chat with their Club friends, manage their Club and also schedule a Club Looking for Group from their Windows 10 PC or [any smartphone]," Ybarra says. "Our early data shows a lot of Preview members engaging with Clubs both on the console and off – it’s really great to see."

Who knows, maybe it's features like this that will inspire more developers to pursue Xbox One and Windows 10 cross-play in their games. But, what if you don't have an Xbox One or play with friends that do?

LFG: the matchmaker for all PC gamers?

Anyone who has played an MMO within the past decade should be familiar with the term "Looking For Group," or LFG for short. Aiming to be the de facto home for PC gamers on Windows 10, Microsoft named its best chance at that goal as such.

LFG essentially lets players post help wanted ads to a publicly accessible message board for each supported game. If you have some missions you want to complete in Destiny, but, say your Club isn't online right now, this is where you should go to find help.

Of course, on Xbox One, every game that supports Xbox Live will now deeply integrate this feature, but it's not far off on the Xbox App on PC.

"I love the fact that, in the Xbox App, I can create a LFG for almost any game on Windows," Ybarra gushes. "If I want to create an LFG for League of Legends, which has nothing to do with Xbox or Xbox Live, I can go create that LFG. So, we definitely want to open it up and make it easier for gaming in general."

The wide support for this feature was made possible through Microsoft's Summer Update, which introduced Game Hubs for the top 500-plus PC games, without any input needed on the developer’s end. (That number seems to have scaled back a bit from the "thousands" figure we were told when first introduced to the Summer Update, mind.)

This means that PC gamers on Windows 10 can find groups with fellow like-minded players regardless of whether their game of choice offers such a tool or one as specific as this. Of course, it has to be one of those 500 games supported by the Xbox App.

The tool allows players to both post and browse LFG requests for specific games, each with specific expectations listed, like "Want players with microphones," or "Want players Level 100 and above." Once enough players accept someone's LFG request, the host can easily invite them to voice chat from within the Xbox App.

“When we get out of preview, I think you’ll see big audiences – even Overwatch on the PC is absolutely on that list of the top [500] games,” Ybarra says. “The developer doesn’t have to do anything there. Their users can use the Xbox App to go to those games and set up LFGs and find people to accomplish those tasks.”

However, said players will have to coordinate forming said group within that specific game’s interface, despite the Xbox App getting them together in the first place. If you're to use this tool with a Play Anywhere game built on Microsoft's Universal Windows Platform, like Gears of War 4, that becomes a lot easier.

"It’s a pretty magical and special moment when we can bring those people together across different platforms but in the same multiplayer framework under LFG to accomplish something," Ybarra says.

Arena on PC is going to take a bit longer

While LFG stands to unite PC gamers in a way that competing networks can't right now, Microsoft's homebrew competition system, Arena, has a little more work to do on the PC much less Xbox One – still in beta on both platforms.

On Xbox One, this deep competition integration will be much easier, since making your game compatible with Xbox Live will come part and parcel with this feature, should the developer wish.

We’re told that, on the PC, the only game currently testing the Arena feature is Killer Instinct, though Ybarra tells us that Microsoft is working with several third-party partners and on first-party games to implement the feature when it lands later this season.

“I think eSports and competitive play in general is a very hot area that a lot of companies are investing in,” Ybarra says. “And, at the platform level, there are many opportunities that we can open up for them and make it just easier if they develop their game on Windows 10 over Xbox Live or on Xbox One for it to be more turnkey than it is today in terms of the investment they have to make.”

Regardless, two of the most interesting bits of the new Xbox Hoilday Update – Clubs and Looking For Group – are rolling out to Xbox One and Windows 10 PCs right now. That’s before you even consider group messaging cross-platform on Xbox Live, Achievements ranked by rarity, a Gamerscore leaderboard and emojis (!!!) on the Xbox One virtual keyboard.

If you want to learn more about the Holiday Update in even more granular detail, check out Microsoft’s own announcement right here.