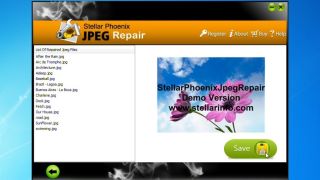 Digital photos are an incredibly convenient way to preserve life's most important memories and moments, and are so easy to use that it's tempting to take them for granted.

And why not? You see a thumbnail, double-click it and the image always appears, so you assume it always will.

But of course life isn't always so straightforward.

It only takes something tiny - a scratch on a CD; a bad sector on your hard drive. And, suddenly, a photo could be trashed: split into chunks; colours displayed incorrectly; bits missing; maybe you can no longer view it at all. Your photo - or photos - have been corrupted.

Don't panic, though - there are several programs around which claim they can repair JPEGs.

They're almost all commercial products, but if you want to fix corrupted photos then you can always pass your images through their trial versions, which will give you an idea of what can be recovered (although repaired images tend to come with a bulky watermark until you buy the full package).

So which tool is best?

To find out, we've tested seven of the most well-known contenders, and the differences are absolutely amazing: some programs really deliver, while others are entirely useless. Keep reading to find out more.

To benchmark our repair tools we needed some corrupted JPEGs. And so we set about creating some, by intentionally damaging four groups of images in very specific ways.

Test 1, 'Zero Signature', was the simplest: we just zeroed the first two bytes in every image. No critical data was lost, so we would expect any capable recovery tool to fix the problem.

Test 2, 'Zero Header', was an extension of the same idea, zeroing the first 32 bytes. This would be a little more difficult to fix, but should still be recoverable.

Test 3, 'Lost intro', saw us delete the first 8KB of every file (that is, the corrupted file started at original file byte 8193). Obviously this missing data can't be recovered, but could our tools make at least something visible?

This is a tough test.

And test 4, 'Lost middle', saw us delete 8KB from the middle of each file (so the data isn't zeroed, it's removed entirely and the file is 8KB shorter). Again, the lost data can't be restored, but would our test programs make the photos more viewable?

It was time to find out.