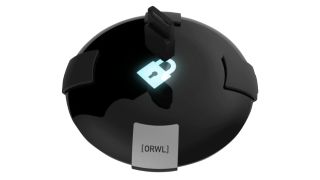 Do you take your computer’s security very seriously? Then a new PC which is set to ship next month may well be of interest, as it boasts a number of security features and defense measures, including a self-destruct mechanism which kicks in to wipe data if someone physically tampers with the machine.

Orwl is a compact PC – it’s a disc-shaped device about the size of your palm – which is designed to be the ‘world’s most physically secure computer’ according to the maker.

It comes with a unique key fob that uses NFC to communicate with the machine, and should the fob (and therefore the user) move more than 10 meters away from the PC, it locks itself – and shuts down its USB (and other) ports so they can’t possibly be used as an avenue for potential skullduggery.

Orwl is also full of various tamper-monitoring sensors (including motion/shock detection and temperature monitors), and should it detect any tampering with its case by a would-be attacker trying to gain physical access to the PC, it can wipe the encryption key for its self-encrypted (RSA-4096) Intel SSD – meaning that your data won’t fall into the wrong hands.

The device also benefits from other security measures including secure boot, secure firmware upgrade, and a password is needed to turn it on (backed up with two-factor authentication, plus the aforementioned key fob).

Core specs include a Skylake Core m7 processor (up to 1.2GHz) with Intel HD Graphics 515, 8GB of system RAM, and the encrypted SSD can be up to 480GB in size.

You also get 802.11ac Wi-Fi, Bluetooth LE 4.2, an HDMI connector and a pair of USB Type-C ports. It can come with Windows installed, or you can go for Linux: either Ubuntu or Qubes OS (the latter being a specifically security-focused distro to tighten things up even further on the software side).

Obviously it’s a niche product at that price bracket, aimed at real security enthusiasts only (and indeed businesses and government employees). But nonetheless it’s an interesting look at some of the fancy security technology we might eventually see being incorporated into more run-of-the-mill PCs in the future.