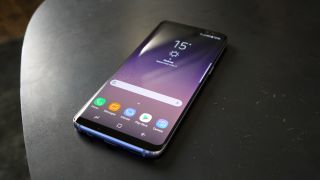 The Samsung Galaxy S8 is only a few months old, but it seems like the South Koren firm is already preparing a new variant of the Galaxy S8.

A Geekbench listing, spotted by German blog, winfuture.de, has revealed the existence of the Samsung Galaxy S8 Mini or “Lite” sporting the new (and yet to be announced) quad-core Snapdragon 840 chipset on board.

The benchmark database doesn’t offer any further details on the hardware, although the handset is said to be running Android 7.1.2 by default.

It must be noted that smartphones usually appear on benchmarking databases on a regular basis, but not every phone is assured of a launch. Keeping this in mind, this could just be a handset that Samsung is merely testing in its labs.

The inclusion of the Snapdragon 840 chipset is an unusual one, as it would mean the Galaxy S8 Mini could potentially be more powerful than the standard US variant of the Galaxy S8.

It boasts Qualcomm's current top-end chip, the Snapdragon 835, in the US while in other regions it features Samsung's own Exynos brain. It means there's uncertainty over the validity of this benchmark, with "mini" handsets historically taking lower powered components.

Samsung is expected to bring the Galaxy Note 8 to markets by the second half of August, so it’s possible that the company will wait until September or October to unveil the Galaxy S8 Mini.

As we stand right now, all theories are possible, so one can’t say with certainty if the company will actually go ahead with the release of the Samsung Galaxy S8 Mini.