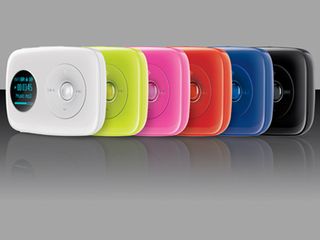 Creative has added a built-in speaker to its Zen Stone line of MP3 players, the Zen Stone and Zen Stone Plus, refreshing the spec for these bargain bin items for another year.

The Zen Stone comes with 1GB and 2GB storage, while for a few quid more the better value Stone Plus has FM radio, voice recording, a stopwatch and clock and equalizer. And there's now a new 4GB model alongside the existing 2GB one.

Both models will feature a built-in speaker on the back from later this year. It's no gimmick either. Through the ruckus of the CES show floor these tiny devices were bellowing out quite a noise.

The Zen Stones play WMA, MP3 and Audible formats, but again the Plus model comes up trumps with the addition of AAC support playback of iTunes tracks - arguably a more important upgrade than the speaker.

And fitness fanatics can buy one of those sporty-looking armbands separately.

Hopefully this doesn't mean the end of headphones, otherwise we'll all have to put up with Bloc Party on the bus to work.