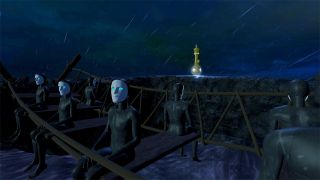 PlayStation VR will expand beyond games this week with the release of its first VR short film: Ctrl.

From production company Breaking Fourth, Ctrl is a film that puts players directly into the mind of a professional eSports player called Liam as he competes in a tournament.

So actually, it's kind of expanding beyond games but not leaving them behind entirely – Sony knows its audience.

Marketing Director at Breaking Fourth, Alyssia Frankland, announced the film's June 23 release on the official PlayStation Blog, stating that it's “Aimed at any PS VR fans who are hungry for deep and dark stories” and would place viewers “in front-row seats” where they would experience Liam’s “fast-paced strategy game first-hand”.

Get your head in the game

The film is already available on GearVR (where it can be purchased for £1.49/$1.99), and was shown at the Toronto International Film Festival VR Showcase and Raindance Film Festival, where it earned positive reviews for its innovative use of VR to tell a story.

According to Frankland, Breaking Fourth was inspired by both the London theater world and gaming, and brought them together to create an immersive story that’s viewable in 360 degrees.

This is a significant release for PlayStation as it shows there are plans to make the PSVR headset more than a dedicated gaming device, which could drive more sales if the right bundles come around (something we're hoping to see perhaps in this year's Black Friday sales). Though it’s been possible to watch films on the PSVR before now in a virtual cinema mode, this is the first time a dedicated VR film has been hosted on the device.

When it’s released on June 23, the 20-minute film will be available to download from the PlayStation Store, though it’s not clear yet how much it will cost. You can watch the launch trailer for below: