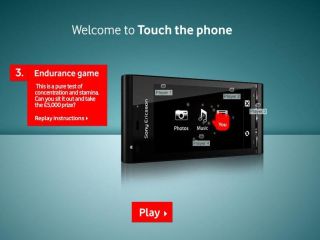 Vodafone has announced a new portal for the casual gaming community - Touch The Phone - designed to encourage users to understand more about the latest phones.

The game is split into two versions - Skill and Endurance - and requires users to hold their mouse over one of a range of top-end handsets for as long as possible.

During the game, information is fired at the player about each phone so by taking part in the game consumers can work out which smartphone they'd like.

The game is designed to create an online leaderboard, with other players' 'hands' showing up on the game, so you can see when competitors fail against you.

Those holding on for the longest time will get the chance to win one of a range of unlocked handsets to be used on any network. These include the Sony Ericsson Satio, Nokia N97 Mini and iPhone 3GS.

Head on over to the Touch The Phone website to start playing - we advise you to clear a decent amount of space around your mouse if you don't want to scream in frustration.