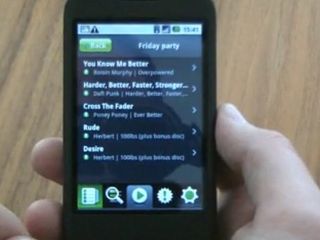 Have you seen the demo of Spotify on Android yet?

If not, check it out and listen really carefully. That sound you can hear in the distance is Steve Jobs swearing.

It looks like Android has found its killer app.

Google's phone OS is pretty nifty, but so far it's lacked the cool factor of Apple's iPhone. Spotify, though, is cool - and if it feels free to the user, it could drive a great big truck through Apple's iTunes business and its iPhone business too.

Being able to stream music from Spotify wherever you go is immensely attractive, but the Android app's ability to store music for offline listening takes it into killer app territory.

With Spotify, Android - or rather, the phone networks - could do to the iPhone what Nokia has tried, and thus far failed, to do with Comes With Music: give it a damn good kicking.

The trick would be to make Spotify feel free. It wouldn't *be* free - record companies need to be paid and that bandwidth isn't cheap either - but the networks could treat Spotify the way they currently treat Wi-Fi.

When you whip out your iPhone in McDonalds or in a train stations the Wi-Fi isn't free - the network's paying the Wi-Fi operator for your access - but it *feels* free. They could do the same with Spotify, by paying Spotify directly and rolling the cost into their monthly charges.

By doing that, iTunes suddenly looks like a pretty bad deal - especially here in the UK where iPhone data plans are rather pricey. Including insurance we're paying £52 per month for our iPhone, and Apple expects us to pay 79p per track on top of that.

On Android, Spotify would give us all those tracks for free. If you're into music, that's a pretty compelling proposition: buy a mobile and get all the music in the entire world for free. You'd never buy a download again.

What Apple will do

Will it work? It already does. Will it kill iTunes? Probably not - but there's no doubt that a decent bundle including Spotify would persuade a lot of people to go for Google and avoid Apple. That gives Apple two options, or three if you include using some of its enormous cash reserves to make Spotify an offer its owners would be insane to refuse.

It can do nothing, stick with the existing iTunes model, prevent Spotify from selling an iPhone app and watch Android gain market share - or it can build similar functionality into iTunes and, in typical Apple style, do it even better. If we were betting men and women, we'd be putting our money on the latter.