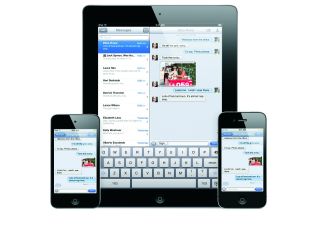 Apple's got an iMessage for RIM

BlackBerry maker RIM's stocks fell to a four-year low yesterday after the announcement of Apple's iMessage.

It seems that investors have got the jitters as Apple nabs yet another key BlackBerry USP; iMessage is an instant messaging service for Apple devices on iOS 5, just as BlackBerry Messenger is for BlackBerry users.

What's more, over the course of this year RIM's stock has fallen over 35 per cent.

Until Monday, BlackBerry Messenger was the only IM service of its kind and had proven very popular with the teenage market.

Rumours that BlackBerry would release and iOS and Android Messenger app have so far come to nought, but RIM could yet claw back kudos by opening BBM up so that Apple, Android and BlackBerry users could all IM each other… that's a utopian dream we can't see coming to pass though, if we're honest.

Via Economic Times and The Next Web