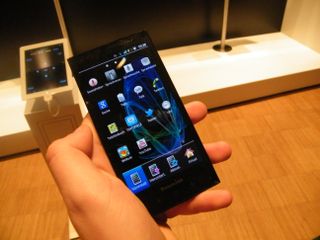 Panasonic will unveil its new smartphone tomorrow at a press conference in Hamburg, marking its return to the European mobile phone market.

Panasonic dropped out of the international mobile market five years ago but is now set to hit Europe once again with the view to then roll out to the US, China and the rest of Asia.

The Panasonic Eluga will be both water and dustproof, will be a miserly 7.8mm thin and will have a 4.3-inch qHD screen. It will also run Android, and while the version is not clear, we're keeping our fingers crossed for Ice Cream Sandwich.

Panasonic also claims that its new mobile will be the first high-end waterproof and dustproof smartphone and will feature an "ultra-slim D-shaped design" and offer "easy portability".

The phone will also include NFC technology with a tag on the rear of the device which will allow for apps such as Google Wallet to be used.

Panasonic has high ambitions for its new range of mobile phones as it aims to shift 1.5 million units in Europe this year and 15 million overseas by 2015.

We will be in attendance at Panasonic's press conference tomorrow to bring you the full details, name and hopefully some hands on shots of the phone in action.

Can Panasonic make it in an already crowded mobile market or has its time out of the game seen its brand be forgotten by consumers who are now all about Apple, Samsung, HTC and LG?